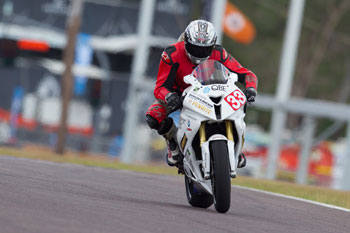 The Aprilia Racing Team has made the shock announcement that Dan Stauffer won’t complete the Formula Oz category of the 2012 Australian FX Superbike Championship.

Stauffer has consistently been upstaged by Yamaha Racing Team rider Cru Halliday during the opening two rounds, and will instead remain with the team in a mentoring role.

Instead, rising star Sam Heath has been hand-picked by team principal Steve Trinder to replace Stauffer aboard the factory-supported RSV4.

“I’m looking forward to continuing my involvement with Aprilia Racing Team,” said Stauffer. “I’m not saying I’m not riding race bikes anymore by any means, but I feel right now [that] I can really add more value to the team by passing on my years of experience.

“I also really get along well with Steve and Rod [Archer] and just wanted to be involved in a different way other than riding.”

Heath is anxious to pick up where Stauffer left off in the Formula Oz ranks, beginning at Queensland Raceway on 21-22 July at the team’s home circuit.

“I couldn’t believe it when Rod Archer rang and asked me if I was interested in riding for the Aprilia Racing Team,” Heath admitted. “I just can’t believe how adjustable the bike is – it reminds me of my old 250GP bike.

“The opportunity to work with a legend like Steve Trinder is not the sort of break that a young rider gets everyday. Even today he helped me so much with bike setup.”

Trinder too is excited to assist in developing rising Aussie talent, impressed with Heath’s early progress.

“I always keep my eye on the young talent and noticed how hard Sam was trying on his privateer machine,” Trinder explained. “Rod and I talked about it and rather than go for an established superbike rider, we thought that we would give a young rider who had shown how hungry he was a chance to make a name for himself.

“Sam has impressed us with his raw talent, now it’s up to us to polish that and see if we can turn him into a star.”