The 2012 BMW S 1000 RR is Australia's Ultimate Sportsbike, as voted by the AMCN AUSTest shootout. 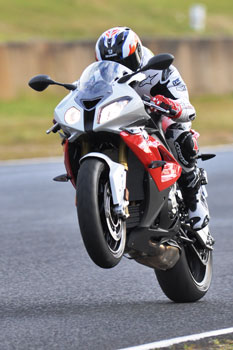 The 2012 BMW S 1000 RR is Australia’s Ultimate Sportsbike, as voted by the AMCN AUSTest shootout.

The revised S 1000 RR was pitted against the cream of the sportsbike world in an exhaustive comparison test program that took place at Sydney Motorsport Park, Eastern Creek, this month.

Australian Motorcycle News had gathered together the nine top sportsbikes available in Australia and assembled an experienced panel of riders to push the bikes to the limit.

The AUSTest 2012 team was effusive in their reaction to the 2012 BMW S 1000 RR. Shod with soft compound ride day Metzeler Racetech K2 tyres, the S 1000 RR with its huge power, switchable engine mapping, quick-shifter and according to the test riders, the best electronics package (DTC and Race ABS) proved to be the favourite.

“For 2012 the chassis that has been thoughtfully revised and refined and at a price of $22,290, represents outstanding value for money and could not be matched by any of the contenders” said AMCN.

Procon Maxima BMW’s Glenn Allerton was on hand at AUSTest to assist with technical support and advise. Allerton is a huge advocate of the standard S 1000RR and its features, he rode the production 2012 at a recent SMSP ride day in wet conditions

“I was blown away at the confidence it gives with street tyres on a wet or damp track,” said the reigning Australian Superbike Champion.

“I could keep the power on hard through the water that was flowing through some corners without backing off – you just can’t do that on other bikes!”

“Australia is one of the world’s leading Sportsbike markets and for the BMW S 1000 RR to win AUSTest for the second the time is a fantastic achievement,” he said.

The AUSTest edition of AMCN is currently available at newsagents nationwide.