Aussie Casey Stoner returns to the premier class podium with third in Malaysia. 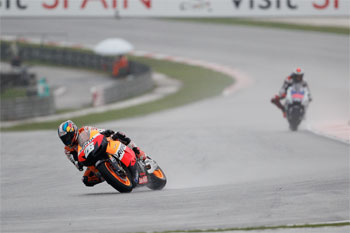 Dani Pedrosa won ahead of Jorge Lorenzo and Casey Stoner in miserable conditions at Sepang.

On a race weekend at the Malaysian Motorcycle Grand Prix in Sepang that saw all three classes affected by the elements in one way or another it was Moto3 rider Sandro Cortese that stole the headlines by grabbing his maiden GP title, whilst Repsol Honda Team’s Dani Pedrosa stunned all with a masterful display in a drenched premier-class race.

In a dramatic MotoGP race hit by torrential rain and a raft of crashes, Pedrosa took the win ahead of Jorge Lorenzo and Casey Stoner, bringing his title aspirations firmly within reach.

It was Yamaha Factory Racing’s Lorenzo who got the holeshot ahead of Pedrosa, while Ducati Team’s Valentino Rossi got a good start from 11th to move into fourth within the first lap.

Monster Yamaha Tech 3’s Andrea Dovizioso, who had a bad start, was carving his way through the pack and soon got past Rossi into fourth to chase down Repsol Honda’s Casey Stoner in third.

Lorenzo, having opted for the softer option wet rear tyre, had a small margin over Pedrosa with 18 laps to go, who had the harder rear tyre.

All Yamahas on the grid as well as Cardion AB Racing’s Karel Abraham had opted for the soft-rear, hard-front combination, with all others running with hards front and rear.

A lap later however and Pedrosa was breathing down Lorenzo’s neck having closed the gap to a fraction of a second.

With 12 laps remaining, Pedrosa was continuing to stick to Lorenzo’s rear wheel as the pair looked locked in a stalemate out on track.

Further back on the same lap, Yamaha’s Bes Spies suffered a heavy crash out of tenth place, putting a premature end to his race. He was taken to the medical centre to check on a shoulder injury, and was later declared ok.

Rossi also dropped from behind Dovizioso back into ninth, as his teammate Hayden fought his way up to fifth. A lap further on and it was drama for Dovizioso as he also slid out of the race, which continued to be pummelled with rain.

It was in the final turn of this lap that Pedrosa made a move stick on Lorenzo to take the lead just over the halfway point, and the Repsol rider instantly looked more comfortable in front, pulling a small gap. In the meantime, NGM Mobile Forward Racing’s Colin Edwards retired with a mechanical option.

As the grid headed into lap nine there were further crashes in the final turn as Crutchlow slid off, followed almost directly in the same place by Power Electronics Aspar’s Randy de Puniet. It was a crash strewn lap, with Bradl also losing the front of his satellite Honda, and Avintia Blusens’ Iván Silva also crashing out.

Back on track Rossi looked in his element as he squeezed past Bautista into fifth. Things were also getting interesting at the front as Lorenzo was being not only dropped off by Pedrosa, but also being closed down by Stoner at a very quick rate.

The rain was coming down heavily with 15 laps left, and Lorenzo suffered a very scary moment, where he saved a near crash just seconds before the Red Flag was shown due to safety concerns. After much deliberating as to whether a re-start would be possible, conditions deteriorated, and the win was awarded to Pedrosa, with Lorenzo and Stoner completing the rostrum.

This now puts Pedrosa within 23 points, less than one race-win, of title rival Lorenzo, with 50-points still up for grabs in the final two races.

Red Bull KTM Ajo’s Sandro Cortese wrapped up the inaugural Moto3 World Championship title at Sepang after a stylish victory ahead of Zulfahmi Khairuddin and Jonas Folger. South Australian Arthur Sissis was 11th, two positions ahead of countryman Jack Miller in one of his best performances of the season.