Shannon Johnson set for racing return in memory of Ajay

Johnson to race in the colours of his late father’s favourite bike, the RS500 GP machine, at Phillip Island. 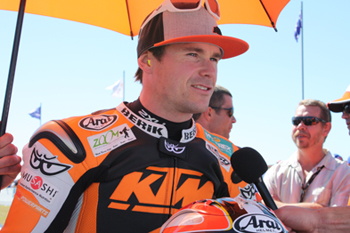 Shannon Johnson will make a racing return at Phillip Island this weekend.

Australian Motorcycle Expo presenting sponsor QBE is backing the bid of Shannon Johnson to race in the colours of his late father’s favourite bike, the RS500 GP machine, in the Superbike support event at the Australian Grand Prix at Phillip Island this weekend.

A former Australian Supersport Champion, Shannon has been touched by the outreach of support following the news of Andrew ‘Ajay’ Johnson’s passing.

A number of parties, including QBE, have played a part in making the tribute ride possible.

Johnson will race with the assistance of Hepburn Motorsports on a BMW S1000RR, which will carry the number seven that Ajay rode to so much success.

The fairings from the bike will be auctioned off following the event, with proceeds donated to Men’s Health Services Australian in order to raise awareness of men’s physical and mental health issues.

The auction will launch on eBay this Thursday, 25 October, and conclude on Sunday, 4 November. The fairings will be presented to the auction winner on the QBE Stage at the Australian Motorcycle Expo Melbourne on Friday, 23 November.

Johnson said he felt proud to know his father left so many with great memories and would be honoured to ride in his colours at Phillip Island.

“Like any son Dad was my hero and it makes me proud to know he left such great memories with so many people from around the world, both on and off the circuit,” said Johnson.

“Not long after I was informed of Dad’s passing many thoughts went through my mind and one thing that was consistent was wanting to ride in memory of Dad at the Australian Grand Prix Superbike support races.

“Thankfully Hepburn Motorsport offered their support to allow me to fulfil a lifelong dream of riding in Dad’s colours by painting a bike same as Dad’s favourite race bike the RS500 GP bike and with thanks to Robbie Bugden I will be able to use the famous number seven.

“I want to use this opportunity to raise support and awareness of men’s health issues, and more importantly mental health matters.

“Without a doubt if it were not for both Hepburn Motorsport and QBE I would not be able to achieve this and hopefully help someone or another family not experience the pain we have endured with the loss of a husband, father and Bar-Pu (grandfather).”

The Australian Motorcycle Expo will be held at the Melbourne Convention and Exhibition Centre from Friday, 23 November to Sunday, 25 November.

Tickets can be purchased online at www.australianmotorcycleexpo.com.au. 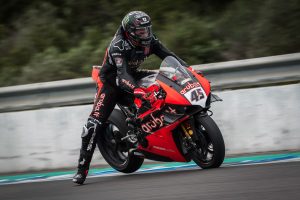