Five-time world champion expects Stoner to be a dominant force at home. 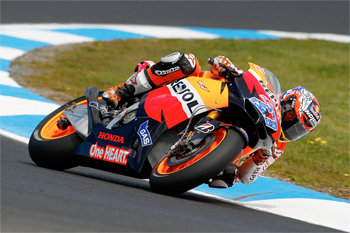 Sunday’s 27-lap MotoGP race will be Stoner’s third Grand Prix since fracturing his right ankle at Indianapolis in August, but Doohan says the Repsol Honda rider is ideally placed to extend his extraordinary run of success at home after finishing on the podium in Malaysia last weekend.

Stoner has won the last five MotoGP races held at Phillip Island and is hoping to make it six this weekend.

“It’s just another circuit on the calendar at the end of the day, but he’s certainly had some great success down there,” Doohan told the ‘Keeping Track,’ the official podcast of the Australian Motorcycle Grand Prix.

“There’s no doubt that this year it’s going to be very difficult for the other guys to keep on his tail – in the past he’s just taken off and made it look relatively simple.”

Doohan, the 500cc World Champion for Honda between 1994-98, admitted news of Stoner’s retirement earlier this year caught him unawares, but told ‘Keeping Track’ he could envisage the two-time MotoGP World Champion making a comeback to the sport.

“I wouldn’t write off the chances of seeing him in a couple of years’ time when he thinks he has some more years left and do a Michael Schumacher,” Doohan said.

“Did it surprise me? It did because of his age, but then he’s been there for so long – a lot of people forget that while he’s just 27, he’s been in the World Championship since he was 16.

“It’s very rare that people in any sport with such a regimented season go on longer than 10 years.”