InsureMyRide The Ultimate Rider program unveiled on ONE

Cash prize of $20,000and a coveted contract with Team Honda Racing up for grabs! 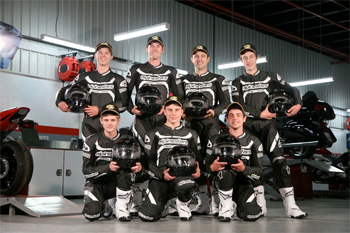 InsureMyRide The Ultimate Rider will launch onto ONE this weekend.

The search for The Ultimate Rider fires up at 6.00pm on ONE, 27 October. Seven rookies from across the country are set to battle it out on two wheels in the ultimate search to find Australia’s next Casey Stoner.

Over eight action-packed weeks, the hottest young motorcycle talent in the country will be pushed to the limit, with one destined to be crowned, ‘InsureMyRide The Ultimate Rider’.

From the makers of Shannons Supercar Showdown, this brand new television series takes the best road and dirt riders in the country and puts them through a series of gruelling challenges.

Under the watchful eye of 500cc champion Daryl Beattie and race team principal Paul Free, the young hopefuls are battling for a cash prize of $20,000 plus a coveted contract with Team Honda Racing.

In the same vein as major motorcycle championships, our riders are battling to accumulate points throughout the series. In the grand finale, the top three riders will go head to head, until only one is left standing on top of the winner’s podium.

In motorsport, the opportunity to race at the highest level only comes to a lucky few, or to those who have significant financial backing.

Daryl Beattie, the country Queensland boy made good, said this is truly the chance of a lifetime for one lucky rider, made possible by InsureMyRide and Honda.

“These young guys really are the cream of the crop in this country,” Beattie said. “But just because they have the talent, doesn’t mean they will crack the big time. The “InsureMyRide The Ultimate Rider” series will elevate one of them even closer to fulfilling their dream.”

Mark Behr, InsureMyRide marketing manager, said the program was a perfect fit for the brand.

“InsureMyRide is not just about great value insurance, it’s also about investing in the bike community,” he said. “This series will give these riders a massive opportunity to compete in the big time.

“Apart from the winner receiving $20,000 and a Team Honda Racing contract, there’s also a chance for a lucky viewer to win the actual Honda Fireblade used in the series.”

Following on from the Australian Moto GP, this is one event motorcycle riders across Australia will not want to miss. InsureMyRide The Ultimate Rider commences 27 October at 6:00pm on ONE.

Click here for further information on the program and its contestants.