Parkes and Medcalf to spearhead Aprilia assault in FX-Superbike finale 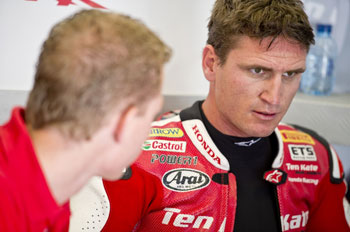 World Supersport regular Broc Parkes will return to Australia at the FX finals.

The Aprilia Racing Team has revealed that international-based Australians Broc Parkes and Pat Medcalf will contest the final round of the Australian FX-Superbike Championship on 9-11 November.

Parkes will return from World Supersport duties to ride the FX-Superbike category on the team’s RSV4, while Medcalf has been confirmed for the Formula Oz category.

“For the final round we have employed the services of two very fast international riders, both being Australians, and both exceptional in their respective classes and championships,” said team owner Steve Trinder.

“Broc Parkes will field the extremely competitive FX–Superbike against many of the best racers in the country, and the young Pat Metcalf will return to the AFX-SBK championship for the final round and race our full-spec Superbike in the very close and hard fought out Formula Oz class.”

Parkes is looking forward to his return to domestic racing, for the first time in over a decade.

“I’m really looking forward to once again racing in Australia, the last time I raced here at a domestic race meeting was back in 1999 from memory,” Parkes said. “I have known the Trinders for many years and they have always run a very professional team with excellently prepared bikes.

“While I have not raced an Aprilia before I’m looking forward to settling in with the team and racing the Aprilia for the final round of the FX-Superbike championship.

“Like everyone else I have heard of next years FX-Superbike 500 race at the end of the year with the $100,000 winner takes all prize and I’m looking forward to teaming up hopefully with the Trinder Aprilia squad to have a shot at the big prize.”

Metcalfe is also excited to return to FX after finishing runner-up in the series last year. He’s been campaigning the British Superstock Championship during 2012.

“First off I’d like to thank the Trinder Aprilia racing team for the opportunity to ride their Aprilia RSV4 Formula Oz bike,” he said. “It’s an excellent opportunity for me to have a race back home and it will certainly be a new experience for me as I haven’t ridden a bike of this spec before.

“I’m looking forward to working with the team and for me personally I’m interested to see how I adapt to a different bike it’s nice to come back to a familiar track after a year of learning new ones.

“Although I’m not sure on my plans for next year it’s an opportunity to have some laps around the new layout of Eastern Creek. I think a lot of people will be interested in doing the 500K race next year and the more laps the better!

“It will be a tough weekend there’s some very stiff competition but I’m sure were up for the challenge and it’s an opportunity for me to race in front of my family for the first time this year which will be nice for a change, but again I’d like to thank the Trinder Aprilia team for letting me have a run, I’ll be doing my best for them.”

The Aprilia Racing team would like to thanks its sponsors for the 2012 season, as without them it is impossible to go racing Aprilia, Brisbane Aprilia, Archers Smash, Motul, RK Chains, Pirelli and Ferodo Brakes.