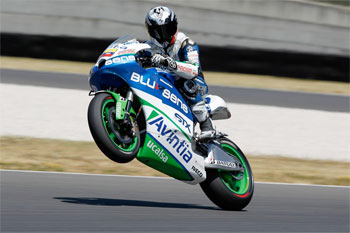 Hernandez suffered a dislocated collarbone at the Japanese Grand Prix earlier this month, paving the way for McLaren to make a shock MotoGP debut at Phillip Island this weekend. McLaren has been contesting the Spanish Moto2 series during 2012.

“I got the call-up on Tuesday night at about 11:00pm, so it was a late call-up, that’s for certain!” McLaren told SPEED in this exclusive interview. “I got another call on Wednesday morning at about nine o’clock to tell me that I had to be at the track at two o’clock to have a meeting with the boys.

“We went for a meeting at the race track and they explained everything they want from me. It all happened very fast. I didn’t think I was going to be riding a bike this weekend at all at the grand prix, so to have the opportunity that’s come about in the last couple of days is incredible.”

McLaren is under no illusions that it’ll be an easy weekend, but wants to gain vital experience throughout the round.

“[My goal is] just to provide these people with as much information as I can and ride the motorcycle to the best of my ability,” he explained. “I hope that we’ll come away with a good result and the team will be happy about the way we go about it.”

Click here for the complete interview with McLaren only on SPEED.