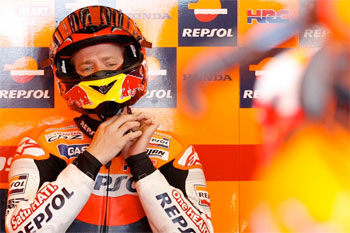 Turn Three at Phillip Island will now be known as Stoner Corner.

Australia’s two-time MotoGP World Champion Casey Stoner has been honoured today with a slice of the Phillip Island Grand Prix Circuit, the high speed Turn Three, to be now known as ‘Stoner Corner’.

The naming announced today by Andrew Fox of circuit owners, the Linfox Property Group, is in recognition of Stoner’s sensational road racing career.

The Australian rider has dominated MotoGP racing at Phillip Island since 2007, claiming five consecutive MotoGP victories, with turn three the scene of many of the rider’s most thrilling sliding manoeuvres.

His mastery of Phillip Island no matter the machine – his first four scalps were on the Ducati, and last year’s win was aboard his Repsol Honda – has a lot to do with pure “balls” says Stoner.

“It is not time on the track that has got my success because everybody I race against has had as many laps, if not more, than me at the island,” says Stoner.

“The only thing I can explain is that because the track is quite slippery and with such high corner speeds, being fast there has a lot to do with balls – how much you want to hang it out.

“It’s a place that really gets the adrenaline flowing and I think most riders will say they love this track.”

Stoner, who will retire at the end of 2012, will make his final MotoGP appearance at Phillip Island this Sunday in round 17 of the championship.

Despite an ankle injury sustained at Indianapolis’s round 11 which destroyed his chances of retaining the MotoGP title, the 27-year-old has his eyes firmly fixed on a sixth successive Phillip Island victory on Sunday – a goal acknowledged by Fox during the naming and trophy presentation.

“Casey, like you, we think Phillip Island is a very special place in the world of motorsport. We congratulate you on what you have achieved here and declare, that from this day on, turn three will now be named Stoner Corner in your honour,” said Fox.

“I do want to say Casey that here, in my pocket, I have another engraved trophy plaque. Just one small change of copy, just in case we have to alter that five to six. Six victories that is. I’m a man of Stoner faith Casey. You do the job Sunday, and we’ll sort the trophy!”

Stoner was given free rein by the Fox family and the Phillip Island management to choose what part of the circuit would have his imprint – and without hesitation he nominated Turn Three, a fast downhill left-hander which MotoGP riders hit at over 250km/h. And the turn’s a constant reminder of Stoner’s sublime talent as he ‘hangs’ the rear tyre out lap after lap.

“Turn three is probably my favourite one in the world. I am almost flat out in fifth gear through there and that is pretty damn fast and it really gets your blood flowing that’s for sure,” said Stoner.

“It always gives me a great rush going through there so to have a corner named after me at Phillip Island is something quite special. It is a great privilege.

“The Island was designed 60 years ago before computers. It follows the flow of the countryside. It is a classic track and beyond anything else we race on. The high speed corners get your heart racing and there are a lot of corners you can slide through.”

Stoner’s completed thousands of laps around the 4.4km Phillip Island circuit in testing and race weekends over the last decade, but one particular journey through turn three stands out for him: a no holds barred qualifying lap in 2011.

“With new tyres and load of grip I went into turn three and shut off for the least amount time I ever have and then got straight back on the throttle,” said Stoner.

“The data on my Repsol Honda RC213V showed I was at 262km/h and the slowest point of the corner was 258km/h. It was bloody quick. I was completely sideways and I had my front wheel halfway across the kerb.

“I got it as good as I ever have, and that was my most memorable moment through there.”

While not sharing too many trade secrets, Casey also believes his ability to preserve his tyres is a key to his Phillip Island success.

“You have to be clever with your tyres because you can wear them out very quickly. It suits me, there are ten different lines on every corner and if you run the same kind of sweeping line on each corner it is not going to be the fastest way round.”

Circuit chief, Fergus Cameron, who has managed the circuit since 1984, also acknowledged Stoner’s tremendous achievements at the island.

“This year we celebrate the circuit’s 60th year and are about to embark on a $3 million track resurfacing and upgrade,” said Cameron.

“In the entire 60 years, there are only two riders who been recognised in this way and that is the man who bought international motorcycle racing to life in Australia, Wayne Gardner, with Gardner Straight and five times world champion, Mick Doohan who was gifted Doohan Corner.

“Casey has set Phillip Island alight, and thrilled our fans, time and time again. We congratulate you and now with Stoner Corner your performances at the island will always be hailed and remembered.”

This weekend will be the final MotoGP appearance of Casey Stoner in Australia before his retirement race in Valencia.

Aboard his Repsol Honda, he will compete in the AirAsia Australian Motorcycle Grand Prix with three practice sessions across Friday and Saturday morning, final qualifying Saturday afternoon, and the race on Sunday at 4:00pm.