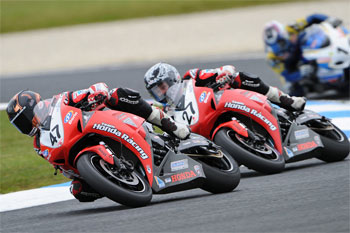 Team Honda Racing made the 2012 AirAsia Australian Motorcycle Grand Prix event their own by claiming victory in all four national Superbike races across the weekend in a 1-2 finish for Wayne Maxwell and Jamie Stauffer.

Stauffer won three of the four Superbike races at Phillip Island, however he was forced to settle for second overall after crashing out of race two on Saturday morning.

Meanwhile Maxwell recorded a tally of 2-1-2-2 results aboard his CBR1000RR Fireblade and was able to continue his streak at the world famous Victorian venue.

“What a weekend for Team Honda Racing,” he said. “To dominate the Superbike category is absolutely awesome and a great reward for the hard work that the team has put in. Jamie was super fast here this weekend and winning three of the four races was an impressive effort so well done to him.

“I have to say a big thanks to my crew chief, Shaun Clarke and technician, Glenn Granger for all their hard work this year and to the team for their unwavering support throughout the 2012 racing season.”

Although disappointed to miss out on the overall after the incident involving Maxwell in the closing stages of race two, Stauffer was content with his weekend form.

“This morning’s race was good, I had a hard battle with Wayne all race and the lead changed many times,” he said. “I returned to the lead on the last lap and was able to hold Wayne off for the win by the smallest of margins – just 0.001 sec, which was the closest finish I think I’ve ever had.

“Overall the weekend was good, despite a crash, three wins from four races is not bad. It was a good way to finish the year, on a strong note with Team Honda Racing. I would like to thank my mechanics, Bryan and Dan for all their hard work throughout the year and also the team partners that make it all possible.”

Newly crowned Australian Superbike Champion Josh Waters race to third overall despite starting from 10th on the grid after a frustrating qualifying session in mixed conditions on Friday.

Waters sliced his way through the pack in each of the four Superbike races to score 3-2-3-3 results, but saw his hopes of victory vanish due to his starting position aboard the GSX-R1000.

“When your main competition is on the front row and you’re on the fourth row it’s tough, but I’ll learn from it and make progress,” Waters said. “I kind of got caught out in the conditions, I knew the weekend would be hard after that, and it was.

“The GSX-R1000 was great all weekend though, it’s nice to be on the podium and I know that for sure next time we’ll be a lot stronger.”

Team Volvo Group Suzuki’s Robert Bugden claimed the fourth position overall for the weekend following a consistent effort, finishing sixth in race one before wrapping the weekend up with a trio of fourth place results on his satellite supported GSX-R1000.

Waters’ teammate Ben Attard was fifth overall for the weekend, the experienced Queenslander taking home 5-3-6-5 results across the races. He was frustrated with the results in a trying weekend, but was content to finish out the season inside the top five.

“It was a tough weekend with the weather conditions for everybody, so it wasn’t great for us,” Attard said. “I would have liked to have better results, but it wasn’t to be and we’ll focus on the next event. Thanks again to the team, who always put in 100 percent and do a fantastic job.”

In Superstock 1000, Linden Magee (BMW) did the business on 101 points from Dustin Goldsmith (Kawasaki) and Phil Lovett (Kawasaki). 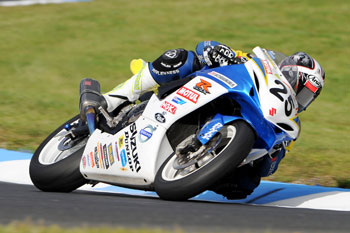 Brodie Waters raced to pole and four wins in Supersport for Team Suzuki.

Fresh back from a number of guest races in the British Supersport Championship, Waters claimed pole position for the weekend and went on to win all three races in demanding fashion before a record crowd at the picturesque 4.445-kilometre GP venue.

“It was a good way to finish off the year, we were lucky enough to be quickest in the first practice and backed it up with qualifying on pole and taking three race wins,” Waters reflected.

“We had a disappointing final ASBK round, so it’s nice to bounce back with a win here and I can’t thank Team Suzuki enough for the effort they’ve put in with the GSX-R600 this season.”

Waters finished on 76 points in the Supersport program, ahead of WNR Kawasaki’s Matt Davies (54) and Adam Christie (Yamaha). In Superstock 600, it was Yamaha rider Aiden Wagner from Kyle Buckley (Yamaha) and Luke Martin (Yamaha).