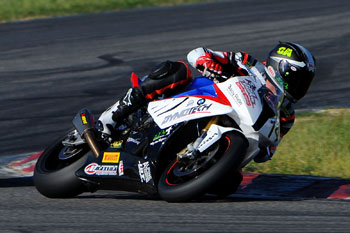 With the ASBK series now having an open tyre rule for next year, Link International has invested in an all-new Pirelli ASBK Privateer Program for competitors in the ASBK championship who choose to race on Pirelli tyres in 2013.

Pirelli will make available the new Pirelli Diablo Superbike 17-inch slick to ASBK riders at $499 per pair ($100 a pair under the 2013 cap) plus Pirelli will pay the rider entry fee (current entry fee $495) in full if riding on Pirelli and purchasing a set amount of tyres per round (currently three front and four rear tyres).

This will result in some serious cost savings to competitors who choose to race ASBK and race on Pirelli tyres.

Competitors can also enter round by round, so state level racers who want to do the local ASBK round only, can also benefit from this program when stepping up to national racing.

Riders will have available the Pirelli Diablo Supercorsa SC DOT race tyre in 120/70ZR-17 and 180/60ZR-17 sizes for the combined Supersport/Superstock 600 classes at $479 per set.

Pirelli will also be paying the entry fee for riders in this class ($495 for Supersport 600 and $395 for Superstock 600) if running on Pirelli and purchasing the minimum quantity of tyres per round, (tyre numbers to be announced by ASBK in due course).

There will also be a contingency program in place for place finishers in each Supersport /Superstock 600 class running on Pirelli.

As with the Superbike class, competitors can enter round by round so state level racers who want to participate in their local ASBK round to experience national level competition, can also benefit from this program.

These new tyres feature new compounds and construction developed in the World Superbike Championship, which will also run 17-inch Diablo Superbike tyres for 2013.

This world racing debut of the new SC compounds will coincide with the first round of the World Superbike Championship at Phillip Island in late February, as ASBK competitors will be racing in support of the WSBK meeting.

The 2013 ASBK season of Supersport/Superstock 600 racing will commence with the current class winning range of Diablo Supercorsa SC DOT tyres.

This class however will also benefit from the debut of a new version of the Diablo Supercorsa SC DOT tyres, to be released to ASBK competitors during the 2013 season.

This will ensure that riders at national and state level commence the season on an already race winning Pirelli tyre, with the added bonus of racing on the new version of Diablo Supercorsa SC DOT as the ASBK season progresses.

Pirelli released their new Diablo Superbike slicks in small sizes to suit 125 and Moto3 bikes in 2012 with great success, and these will be made available to Superlites riders at $349 per set with contingency to be announced prior to the commencement of the ASBK season.

These sizes have a special construction and compound for racing conditions on 250 production motorcycles. $5000 worth of Contingency prizes will also be made be available to riders in this junior feeder class.

“Link International has been a long term supporter of racing at all levels in Australia and this coupled with Pirelli’s passion for racing has inspired us to make a real difference to the national road racing championship next year.

“Our campaign will effectively keep costs to a minimum for teams at a time when budgets are stretched and money is tight and enable the sport to remain healthy well into the future,” said Brenden Stoeckert, general manager of Link International.

“We believe that this form of racing has been instrumental to the success of Australian riders in the international scene and want to make sure that future potential stars are not limited from competing and gaining the experience necessary to take them to the next level.”

“Pirelli’s vision and foresight will help further grow road racing in Australia,” Konsky said. “It’s without a doubt the most forthcoming program Australia has seen and shows their commitment to domestic road racing.

“In a world where they are now the leaders in development for the F1 and the World Superbike Championship, it goes without saying that Pirelli’s commitment to performance racing stands out from it competition”

Competitors will need to buy a minimum number of tyres round by round, to qualify for the Pirelli ASBK Privateer Program. There will also be a maximum amount of tyres per round that can be ordered.

Further details and the official Pirelli tyre order form for the ASBK 2013 will be available in late 2012 following finalisation of homologation with Motorcycling Australia and the ASBK.

Tyres will be available to order for the ASBK series from January and February 2013.

The Pirelli ASBK Privateer Program will be exclusive to the ASBK series in 2013.

Pirelli Motorcycle Tyres are imported and distributed exclusively in Australia by Link International.