Six rounds including the FX-500 to make up next year's AFX-SBK series. 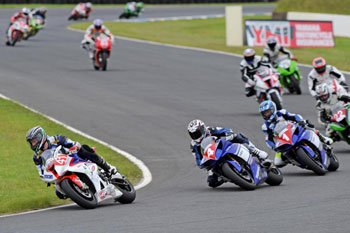 The FX-Superbike class in action at Sydney Motorsport Park during 2012.

The format of the events will stay the same at the first five rounds as it was in 2012 with there being a full day of practice on Friday with 5 x 15 minute sessions per class, followed by the FX Nationals on Saturday with one 16 minute qualifying session and three races.

Sunday will again receive one 16-minute qualifying session and three point scoring races per class in the AFX-SBK championship series.

The FX-Superbike class championship will have six point-scoring rounds in 2013 with the final round at the fifth event of the 2013 FX calendar at Sydney Motorsport Park on 4–6 October being a double header point-scoring round with all six races over the two days being scored together.

The FX-Nationals for the FX-Superbike class will finish at the fourth round at Queensland Raceway in August.

All classes having their championship series finale at the November round will have two races, instead of the usual three, those two races will get double points per race.