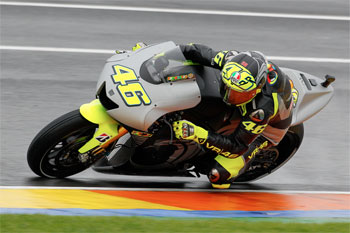 Valentino Rossi made his much anticipated return to Yamaha in the rain on Tuesday at Valencia.

Valentino Rossi made his long-awaited re-emergence on a Yamaha today at the rain-hit first 2013 season test in Valencia, as the MotoGP grid had to cope with difficult conditions on its first day of 2013 season testing.

Yamaha Factory Racing’s Rossi went out for an initial shakedown in the morning when it was still dry, but very cold. He then set out putting in more laps once the rain had arrived, ultimately finishing the day in sixth.

His teammate Jorge Lorenzo opted not head out on track in the unfavourable conditions. Yamaha has since confirmed it will not take part in today’s test in Valencia, opting instead to test in Aragón.

Repsol Honda Team’s hotly anticipated debutant Marc Márquez was another rider not go out on track, with the youngster instead waiting for a dry track for his MotoGP debut. This was also the case for Dani Pedrosa, who was set to evaluate the 2013 model against the machine he raced with last weekend.

Ducati Team’s Andrea Dovizioso caught the last bit of dry track in the morning to make his first outing on the Italian machine, finishing the day in third, and stating that his initial impressions were good.

Teammate Nicky Hayden did not step out until 2:00pm, deciding to wait for the track to be completely wet before setting a time. He was working on his suspension and briefly tried a new chassis, although stated that in the wet conditions it was tough to judge progress. His time saw the American in fifth place on the timesheet.

Pramac Ducati’s Andrea Iannone, who was also making his debut in the premier-class, only did one out-lap before returning to the pits in the morning. Like Márquez, he was waiting for better conditions to start his MotoGP career, however decided to take the plunge in the afternoon, ultimately finishing 13th, after completing the second most laps with 40.

Standing in for the injured Ben Spies and also taking his first spin on the Ducati was Michele Pirro, who ended the day in seventh.

Monster Yamaha Tech 3 was also to see new-boy Bradley Smith head out on track for the very first time on a MotoGP machine, however MotoGP veteran Loris Capirossi jumped on his bike first in the morning to set some laps in the dry.

This was part of Capirossi’s job as MotoGP Safety Officer, meaning he has now tested the majority of bikes on the grid. Smith however, opted to stay in his box, although stated if tomorrow is wet from the start he is likely to head out.

Cal Crutchlow, nursing a broken bone in his hand from the weekend, decided not head out, hoping for improved weather tomorrow.

LCR Honda MotoGP’s Stefan Bradl was given the 2013 Honda to try for the day, yet posted his initial time this morning on his current machine. Ending the day in second, the German did not go out in the wet, putting in only five laps.

GO & FUN Honda Gresini’s Álvaro Bautista was the first to put the hammer down this morning, topping the timesheets for the first part of the day with a five-lap stint. This was however all the Spaniard did, as some new parts from Honda were not testable in the wet, meaning he is hoping for dry weather tomorrow.

Cardion AB Racing Karel Abraham took his first outing on his new ART machine, having switched to the CRT bike from the satellite Ducati. Abraham was hesitant to head out once the rain came, yet ultimately put in 27 laps for the day to get used to his new bike.

NGM Mobile Forward Racing was pitching its Suter against two Kawasaki-powered FTR machines, with Claudio Corti lapping on both early on, and Edwards heading out on the FTR just before lunch in the wet. Edwards stated that he was very content with the FTR and would make it his motorbike of choice. Edwards ended the day in 11th and Corti in eighth.

Power Electronics Aspar’s Aleix Espargaró was continuing work on his new chassis, whilst teammate Randy de Puniet was working with a new swingarm among other upgrades. Both were left frustrated by the weather, yet will continue their test work tomorrow even if it rains.

Avintia Blusens’ Hiroshi Aoyama was one of the early ones out on track with the team’s BQR-FRT, with Héctor Barberá also familiarising himself with his new machine. Aoyama ended the day in fourth (dry time) and Barberá in 14th.