Thousands are set to turn out to this week's Australian Motorcycle Expo Melbourne. 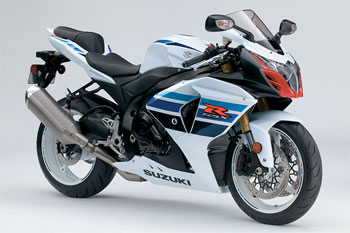 See this 1985-inspired commemorative edition of the GSX-R1000 at the Expo this weekend.

Thousands are set to turn out to this week’s Australian Motorcycle Expo Melbourne with the lure of a multi-million dollar display of bikes.

With a full complement of manufacturers and distributers on hand, the exhibition is shaping up as the largest standalone motorcycle event of its kind.

Many of the standout models remain under wraps, to be revealed to the media and public today.

A handful of the confirmed feature releases include:
Honda – The much-anticipated launch of the adventurous new CB500X alongside the sporty CBR500R and naked CB500F. The trio share common core features but offer three different riding experiences.

Kawasaki – Kawasaki updates its Ninja ZX-6R for more performance as well as introducing the 2013 Ninja 300, a class leader that boasts power and torque at an affordable price. 40 years after the birth of the original Z also comes the new Z800, an aggressive new design direction for a popular line.

Husqvarna – With the new TR 650 Strada and the new TR 650 Terra, Husqvarna Motorcycles extends its program of highly agile, dynamic single-cylinder motorcycles by adding two attractive new machines. Their slim, wiry stature and masculine, dynamic design gives the new Husqvarna TR 650 models a progressive, light and energetic look, whether as the “Terra” version for light terrain or as the “Strada” version for asphalt-based motorcycling fun.

Triumph – The lighter weight Street Triple and Street Triple R boast an all-new chassis resulting in razor-sharp handling, agility and precision. Engineered to optimise dynamism, agility and rider enjoyment, the design offers a weight saving of up to 6kg on outgoing models thanks to fewer pieces and fewer welds in the frame. The brand will also make its entry in to the touring segment with the new 1215cc Trophy SE which offers supreme ride comfort and dynamic handling, complemented by a host technology features.

Suzuki – A focus of Suzuki’s exhibit will be the commemorative edition GSX-R1000, celebrating the one-millionth production of the iconic Superbike. Also on show is the new street bike, the INAZUMA 250, designed to meet growing demand for reliable and cost-effective transport as well as all-new updates to the Boulevard touring line, the C90T and C50T. Wraps will also come off a number of previously unreleased bikes.

Aprilia – One of only 16 made, Aprilia’s RSV4 Carbon Special Edition is sure to draw crowds. It offers the highest specifications available from the brand and enhancements from technical partners. Also on show are the brand new Aprilia SR Max 300 and SR MT 125 models, the latter making its first public appearance at the event.

Moto Guzzi – Direct from EICMA comes the Moto Guzzi California 1400 ATC/ABS which sets new standards for handling and comfort for the cruiser market. The event will mark the bike’s first public appearance outside of Europe. The V7 range will impress also – the V7 Stone, V7 Special and V7 Racer bring classic Moto Guzzi styling to the table and are sure to suit any taste.

MV Agusta – MV Agusta’s return to the Australian Motorcycle Expo is marked with a range of spectacular bikes on show. These will include the newly released Brutale 675, a custom Brutale 920, the brand’s two top spec models; Brutale 1090 RR and F4 RR, as well as an historic MV Agusta 500 Factory Grand Prix bike.

KTM – KTM introduces the new 1190 Adventure and Adventure R models to its range at the Australian Motorcycle Expo, along with its new LAMS-approved 200 Duke.

BMW Motorrad – Based on the BMW S 1000 RR comes the HP4, touted as the lightest four-cylinder Supersports bike in its class. It weighs just 199kg, and packs a punch with power output of 193hp. The HP4 enters the market as BMW’s first 4-cylinder bike in the HP family. BMW’s new C 600 Sport and C 650 GT twin-cylinder maxi scooters will also draw a crowd. Innovation and dynamic design are delivered in two premium models, one for riders with sportier ambitions, and one for those who place a premium on comfort and touring.

These are just a sample of the new releases, with number of brands remaining tight-lipped about their new models ahead of today’s media reveal and opening day.

The event will run from Friday through to Sunday at the Melbourne Convention and Exhibition Centre.

Tickets are available at the door or online at www.australianmotorcycleexpo.com.au. All online purchases go into the draw to win a family pass to the Phillip Island 2013 World Superbike event, valued at $300.