Red Bull Racing Australia has confirmed the two-time MotoGP champion will race a V8 Supercar in 2013. 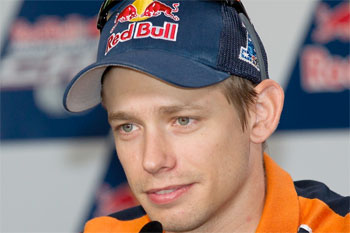 The 27-year-old will drive Craig Lowndes’ 2010 Bathurst-winning VE Commodore in the Dunlop Series – the development category – in all seven rounds.

Stoner will have a further two test days in his Red Bull Racing Australia Pirtek Holden before taking part in his first ever sanctioned race on four wheels in the curtain-raiser to Adelaide’s Clipsal 500 next month.

“I really don’t know how I will go to be honest,” Stoner said of his expectations. “I have had one proper test in the car. I went well but it doesn’t mean anything. I haven’t been against anyone in similar cars or been on different tracks.

“There are a lot of things to learn and I am trying to fast track it. I have no expectations except that I want to enjoy it and not get too wound up. It is great category and I will be racing around Aussies. I want to make some new friends and enjoy it.”

Stoner first met the Triple Eight Race Engineering team in 2011 and went on to complete his first test in a V8 Supercar the same year.

He was a regular fixture in the team’s garage in 2012 and as a long-time Red Bull athlete his joining the all-new Red Bull Racing Australia outfit for the 2013 season is a natural fit.

Since announcing his departure from MotoGP mid-2012, speculation had been rife that Stoner would return to Australia and race under Roland Dane with the 2012 championship-winning Triple Eight team. Only contractual discussions prevented an earlier announcement.

V8 Supercars is a new endeavour for Red Bull and Stoner, and both parties are excited at the prospect of what the 2013 V8 season holds.

Stoner will race with his trademark number 27.

For more from Stoner on his V8 switch, check out this interview with the official V8 Supercars website.