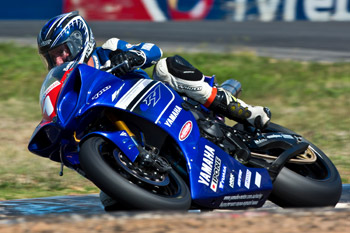 Curtain on his way to more success in the FX-Superbike and Formula OZ classes. Image: [email protected]

Yamaha Racing with Ipone’s Kevin Curtain stamped his authority on the 2013 FX Superbike Championship with an impressive performance at round two of the series held at Winton Motor Raceway in Victoria yesterday.

Race two’s results were a carbon copy for the podium places with similar gaps again separating winner Curtain, Olson in second and Parkes in third.

0.691s separated the top three in the final race of the meet, with Parkes gaining the upper hand this time over Olson and then Curtain, who held onto the round win.

After two rounds Curtain has 14-point lead over Olson who is a further two points clear of Parkes. Matt Walters’ DNF cost him dearly this weekend – he drops to fourth ahead of Trounson in fifth.

“I had a good time racing today,” Curtain said. “Both Rick and Broc were riding really well and it was a tough race as any mistake would cost not just time but positions as well.”

“I never get tired of winning races and today put us in a good position in both championships.”

Olson swept proceedings in the FX 600 class, joined on the podium in race one and two by Cru Halliday and Michael Blair, while Callum Spriggs and Justin Di Giandomenico factored at the front in the final race in positions two and three.

“It was important for me to string some races together and not doing anything silly and lose touch in the championships,” explained Olson.

“Crashing instantly means not finishing and in a six round championship, not finishing one race is costly, so today was all about being consistent and racking up some points.”

Olson holds a four-point advantage over Spriggs and Halliday who are locked on 116 points apiece.