Lorenzo wins Qatar GP ahead of Rossi and Marquez

Defending World Champion on top again in Losail as The Doctor and the rookie steal the spotlight. 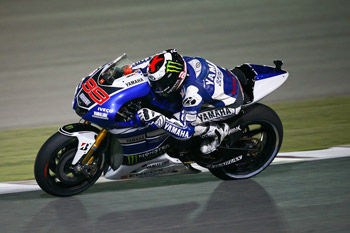 Lorenzo led the Qatar GP from start to finish in a convincing display. Image: MotoGP.com

Jorge Lorenzo left his rivals in the Qatar dust with a commanding ride from pole position to victory in the first MotoGP race of the season.

Under lights at Losail the defending World Champion left little to chance, leading the pack away and never looking back as he crossed the line with a 5.990s buffer.

An engaging scrap for the minor podium positions went the way of Valentino Rossi, marking a 1-2 finish for the Yamaha Factory Racing outfit.

Rossi was forced to fight back from a slow start before zeroing in on the Repsol Honda pairing of Marc Marquez and Dani Pedrosa in what would be the battle of the race.

Marquez had disposed of Pedrosa earlier, the rookie biding his time before putting a clean pass on his teammate who could do little to defend.

Rossi loomed large after Cal Crutchlow lost ground with a mistake, and was instantly on the tail of the factory Honda battle.

The Doctor looked at home again on the YZR-M1, toying with Marquez for a short time before making his move to confirm a Yamaha 1-2.

Despite being beaten to second, Marquez’ performance was on par with the best as he showed little sign of being intimidated by his more experienced rivals.

He crossed the line less than three-tenths shy of Rossi, with Pedrosa left languishing in the closing stages and clearly despondent as his younger teammate headed for the podium and he the team garage.

Monster Tech 3 Yamaha’s Cal Crutchlow punched above his weight for much of the race before the pace became too much. He finished the Grand Prix 18.764s off the lead as the predicted factory battle between Yamaha and Honda played out ahead.

Alvaro Bautista, Andrea Dovizioso and Nicky Hayden crossed the line in close company for positions six through eight, with Andrea Iannone a distant ninth and Ben Spies recovering for 10th.

The Power Electronics Aspar pairing of Aleix Espargaró and Randy dePuniet were the lead CRT machines home in 11th and 12th outright.

Bryan Staring was one of six non-finishers in his maiden MotoGP outing on the Gresini Honda CRT bike.

Pol Espargaró won a close opening Moto2 duel with a pass on Scott Redding for the lead with five laps remaining.

The Tuenti HP 40 rider settled into third early as Takaaki Nakagami led proceedings up until lap nine when Redding made his move.

Espargaró followed suit before putting the pass on the Marc VDS Racing Team Rider who offered a final run of resistance on the last lap.

The Spaniard held off the Brit by 0.844s, with Nakagami recording a career first category podium and Dominique Aegerter and Mika Kalio rounding out the top five.

Australian Ant West unfortunately failed to finish, crashing out in the first half of the race.

Luis Salom followed suit with MotoGP and Moto2 counterparts recording a pole-to-flag victory in an entertaining Moto3 race to open the evening under lights.

The lead changed numerous times before Salom stole the advantage heading into the final lap. He crossed the line fourth-tenths clear of Viñales, with Rins riding the slipstream to third.

Alex Marquez, younger brother of Marc, made it a Spanish whitewash from first to fourth, with German Jonas Folger rounding out the top five.