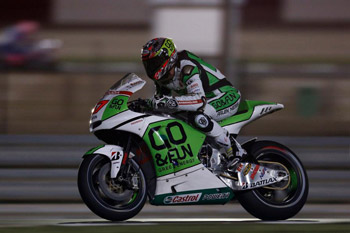 Staring will take the experience of his first MotoGP start to the second round after crashing out of contention in Qatar.

Bryan Staring’s maiden MotoGP outing has ended early with a crash on the second lap leaving the ambitious Australian disappointed.

From 23rd on the grid, the GO&FUN Gresini Honda rider made a safe start and began to settle into place before crashing out of contention.

Fortunately Staring walked away unscathed, though deflated after the goal of a Grand Prix finish went unrealised.

“I am disappointed because I didn’t want to finish my MotoGP debut in this way,” said Staring. “We made progress throughout practice but then I ruined it all with a stupid crash.

“I am disappointed for myself and for the team, who have helped me out so much. Hopefully I can make up for it in America.”

Fausto Gresini was quick to point out the positives from Staring’s debut MotoGP start on the team’s CRT machine.

“Bryan made a rookie error, which was a shame, but he did a great job in practice and made a lot of progress,” said Gresini.

“The team will help him out any way they can and I am sure he will be smiling again soon.”

The Australian rider will have a fortnight to regroup and ready himself for the second Grand Prix of the season at the Circuit of the Americas near Austin, Texas.