Hook certain that top five will serve as vital foundation 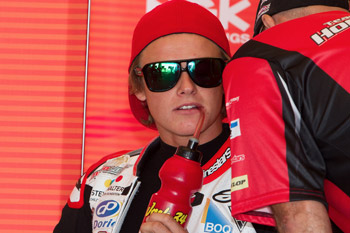 Graduating from Honda’s factory Supersport program after a competitive 2012 season, Hook has taken the challenge of adapting to the 1000cc Fireblade in his stride and shown maturity well beyond his 20 years of age.

Qualifying in ninth, Hook improved a further two places in the Superpole session to snare second row starts for the 16-lap races.

He finished a commendable fifth in the first race but not before a Herculean effort to race back to the pits after collecting the stricken race bike of Chas Hern who high-sided in front of him.

Hook jumped aboard his second bike to make the restart and recomposed himself for a top five finish.

Fortunately the second race was less eventful for the rookie, who again made his way from seventh to fifth.

“To be fifth in the championship after our first event is really exciting although it would have been much better without a crash,” said Hook. “I am obviously looking to move forward from here to put some real pressure on the front of the field although it is a very strong field this year.

“The team have given me a really good setup this weekend and I already feel strong. I’m looking forward to seeing what more we can get from the bike going into Queensland.”

Team principal Paul Free offered a glowing appraisal of his rookie rider’s performance after the weekend.

“I am extremely proud of Josh for his efforts this weekend,” said Free. “He is riding fantastically and is really beginning to mature as a rider.

“For him to be placed 5th after his first event shows how much he wants it and I believe there is more to come yet.

“As our first event of the season on Dunlop tyres and with the bike set-up to Australian standard, I am pleased to come away with solid points, however I won’t be resting until Queensland to push these riders further up the ladder and find more from both motorcycle and rider alike.”