CycleOnline.com.au checks in with Glenn Allerton just a few days after he clean swept the Symmons Plains ASBK event.

2011 Australian Superbike Champion Glenn Allerton had a lean year in 2012 by his own standards, but may have struck gold with the combination of the new BMW HP4 and the Pirelli tyre package. Allerton dominated the first point-scoring event of the ASBK at Tasmania’s Symmons Plains over the weekend, sweeping qualifying, Superpole and both races.

CycleOnline.com.au caught up with Glenn to talk about his winning weekend, his World Superbike foray and further ambitions and his thoughts on racing alongside V8 Supercars. 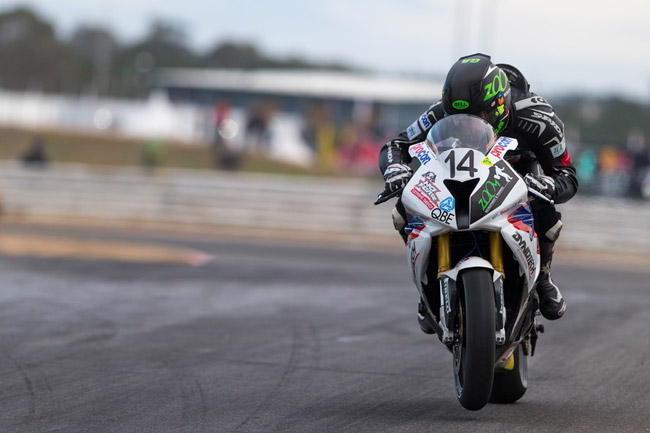 Allerton on the gas out of the complex of turns at Symmons Plains. Image: Andrew Gosling/TBG Sport.

Congratulations on a successful weekend at Symmons Plains. You must be satisfied with the result?

You dream about having weekends like that. Obviously when you put as much effort into it over the years you want to get the best result that you possibly can but results like that don’t come easy and it comes off the back of a lot of hard work from our team the whole season. Getting our head around the new HP4 and getting help from Pirelli to understand the new tyre and getting the most out of it has been good. A lot of work behind the scenes has gone on and it’s just been a really great start.

Were you able to translate any of what you learned or the parts that were developed at the World Superbike event to your ASBK-spec bike?

We learnt a lot with our World Superbike campaign. Nearly all the parts that we used can cross over onto the ASBK bike except for some of the internal engine parts. The team learnt a lot about how to make the ASBK engine make more horsepower and I think it showed on the weekend because we had a very fast bike. As far as the setup of the bike goes, like the suspension and such parts that we used at World Superbikes, it came straight to the ASBK bike because you can still use it all.

Just having your mind set on trying to get one-hundred percent out of every corner because that’s how I had to ride it at World Superbikes you learn very quickly that you have to operate at a much higher level and ride out of the comfort zone. It helped out a lot and we carried a fair bit of confidence out of it. We had the best possible result at Phillip Island that we were going to get. To get the bike further up the grid than 12th I would have needed the other guys to start falling off in front of me. 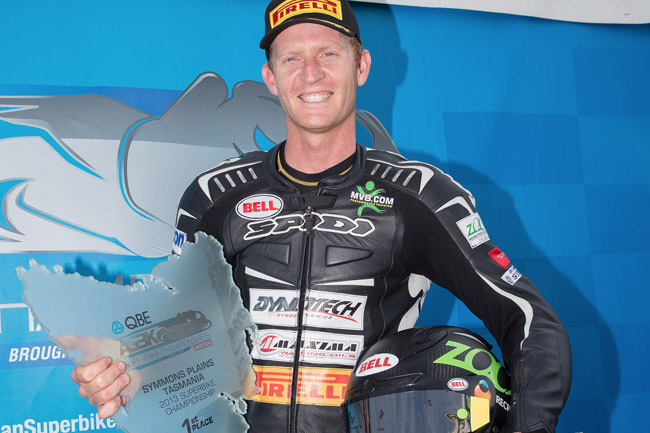 Does it make you hungry to contest more international events?

Absolutely. We learnt so much at World Superbikes, especially about weight. Those bikes are right on the weight limit and ours was a bit heavy, so I think it hurt us more than we realised because you have to stop all that weight, turn it and accelerate again and that’s where the other guys had the advantage on me. I don’t think it was all engine power.

We’re looking at doing another World Superbike round at the end of this year. It’s not confirmed yet but we’re looking at trying to race at Laguna Seca mainly because it’s a track that we know and the team has a fair bit of infrastructure already set up over there to make it happen. It’s just a matter of finding enough dollars to make it happen. I think we’ll be able to go to America in the same position as the other guys.

You’re a strong supporter of the ASBK and the V8 Supercars competing together. What do you think the ASBK can learn from these events and implement at standalone rounds?

I think as far as a race meeting goes I don’t think there’s any way to make it that much better other than altering the way the races are run, but doing that it becomes tough because it becomes more expensive. If you want to run shorter races, back to back, maybe like V8s, you’re probably going to use more tyres. I think the off-track activities is what we need to look at. I think we need to turn our racing into a show, or a festival if you like.

At the V8s you’ve got things like the Cars cartoon setup there which the little kids can identify with. You’ve got all sorts of activities going on off the track that make families want to come because the kids have something to do. I think the ASBK are on the right track, they understand that, they want to to do more off-track activities in between races which will keep the people interested, and maybe give the kids something back. The new Throttle Jockeys setup is really good, you give the kids something to do.

I remember when I was a kid all I wanted to do was ride a motorbike the whole time. I would have loved it if I turned up to a race meeting and they had an opportunity for the kids to jump on a bike and just ride around. If you can get the kids interested at a young age they can be potential racers. I was one of them back in the 90s. I went to an Oran Park 2+4 and watched the Superbikes go around and I still remember meeting Shawn Giles. I’m excited about the event in Darwin being with the Supercross. Dirt bikes are my background and I still have a lot of passion for them. That would be great to incorporate Supercross in our program – the bigger the show, the better.

You’ve got a solid break now until Queensland Raceway. Do you plan to test there before the next round?

We’ve got a test planned on the 24th of April. We’re going to be confident going there. We’ve got a really good package right now. A lot of people say that QR is Jamie Stauffer’s good track. I haven’t had the package underneath me to show what I can do but now it is there I feel like I can do well. When we get there we’re going to be very hard to beat.