An intensive two-day test session will help teams to gather data ahead of the track's addition to the 2014 calendar. 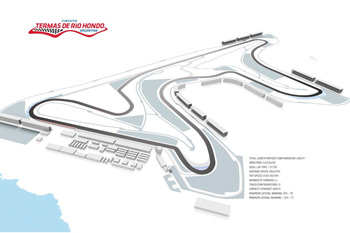 A selection of MotoGP teams will visit Argentina’s Circuito Internacional Termas de Río Hondo in July to familiarise themselves with the layout and gather data ahead of the track’s official inclusion on the 2014 schedule.

Following the TT Assen in the Netherlands, teams will travel directly to the province of Santiago del Estero to get a feel for the 4.805 kilometre, 14-corner circuit.

With a potential top speed exceeding 315 kilometres an hour and a 1.060 kilometre straight section, an ideal lap time has been estimated at 1m31.730.

The four day excursion, beginning on 1 July, will involve two days of intensive testing followed by a range of media commitments in the province.

So far Honda, Ducati and Yamaha are all confirmed participants, with details of the teams and riders taking part to follow shortly.

The planned grand prix of Argentina was removed from the 2013 schedule after conflicts arose between Spanish oil giant Repsol and the Argentine and Spanish governments.