Cudlin builds on points lead after fourth round of championship. 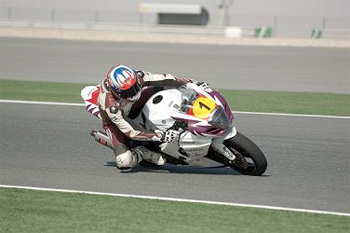 Cudlin continues his forwards march despite setbacks at the latest QIRRC event.

Australia’s Alex Cudlin has stretched his points advantage in the Qatar International Road Race Championship (QIRRC) despite illness and engine troubles threatening to slow his charge at the Losail Circuit.

The 2010 World Endurance Cup Champion entered the event with a solid lead over former Moto2 rider Mashel Al Naimi and took pole position over his rival for the first of two races as part of the support events for the MotoGP season opener.

Prior to the start of the opening race, Cudlin was cut down with an acute bout of food poisoning which he battled through to take the win.

“That meeting was one of the toughest I’ve ever had,” said Cudlin. “I couldn’t believe how sick I was during the night before the start, so I was ecstatic to get the race one win.

“By race two, I could hardly get on the bike. I just wanted to lie down and go to sleep!”

A mystery engine gremlin that had developed towards the end of the race re-appeared in race two, meaning Cudlin’s top speed on the kilometre-long front straight was some 20 kilometres per hour slower than the riders he was battling.

He held his ground however and put up a fight up until the wave of the chequered flag, eventually beaten in a near photo finish with Al Naimi.

“I know I should be happy with the one-two results – and I am considering the circumstances – but I hate losing, especially by such a small margin. But that’s racing and sometimes you get beat, no matter how hard you try.

“The main thing is I have a 33-point lead in the series now, but I’ll not be taking it easy for the remaining rounds. I know my fitness is at the best level it has ever been, and I’ll be getting lots of seat time coming up in the Endurance World Championship, so I’ll be coming back here to show them who’s boss next time!”

The next round of the QIRRC will be contested from 10-11 May.