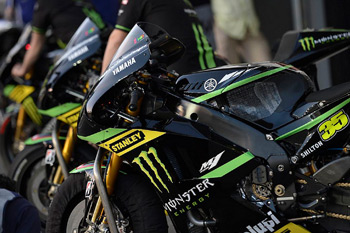 Damage from an electrical fire in the Monster Yamaha Tech 3 pit garage at the Circuit of the Americas (COTA) will not affect the team’s participation in this weekend’s MotoGP event, according to the team.

A battery used on the bikes’ electric starter caught fire and the overhead sprinkler system was immediately activated, drenching the garage’s contents, including computer equipment.

Due to their proximity, sprinkler systems within the Yamaha Factory Racing team, LCR Honda and Cardion AB garages were also activated.

Herve Poncharal said COTA’s stringent fire prevention measures helped to limit the damage and noted a full investigation would be carried out as to the exact cause of the initial blaze.

“Unfortunately there was a small incident inside the Monster Yamaha Tech 3 garage overnight,” explained Poncharal. “The process of starting a MotoGP machine requires an electric starter and overnight they are left on charge.

“This is standard procedure and something we have been doing ever since the introduction of the four-stroke era.

“Unfortunately in the night one of the batteries caught fire. We have suffered quite a lot of damage and of course it is not ideal preparations but thankfully the fire prevention measures undertaken by the Circuit of the Americas and the assistance of the local Fire Department were invaluable in limiting the damage.

“The sprinkler system was immediately activated and fire crews on scene promptly and I am grateful for that. We will be conducting a thorough investigation to find out why this issue occurred and take the necessary steps to ensure it is not repeated in the future.

“I would like to apologise to the Yamaha Factory Team, LCR Honda and Cardion AB too, as the sprinkler system was also activated inside their pit area as well.”

Tech 3 staff are currently having to dry individual parts and components by hand to prevent future corrosion.

Rider Cal Crutchlow thanked his team for their tireless effort to overcome the setback.

“The team has now spent all day cleaning up the water, and haven’t even touched the bikes yet,” he said, via twitter.

“They are working hard and it’s not easy. It means we may be hindered a little in resources and time but sure we will be on track.”

Massimo Meregalli, Yamaha Factory Racing team director, said the team faced a large task to disassemble the bikes and ensure they are dry and in proper working condition ahead of practice.

“The first impression we had when we arrived was really bad but fortunately it doesn’t look as bad as we initially thought,” he explained. “We will now have to disassemble the bikes and dry them, clean them and rebuild them again. For sure it could have been a lot worse.

“We are now in the process of cleaning everything. We have to say a big thank you to the circuit staff who are putting in a lot of effort to be of help.”