Caretta Technology rider impresses in first race at Circuit of the Americas. 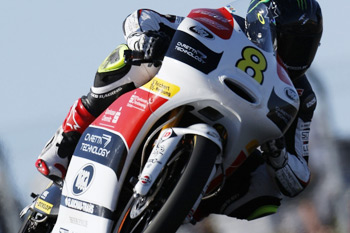 Australian Moto3 charge Jack Miller feels he can continue fight at the front of the field after a strong sixth place finish at the Red Bull Grand Prix of the Americas.

The Caretta Technology rider was pleased with the performance of his FTR chassis, identifying strong handling as its main form of attack against the KTMs’ straight-line speed.

Like the rest of the field, Miller’s race strategy was reset for a red flag stoppage, which resulted in a five-lap sprint to the line.

The potential for a top five finish went begging when a rider crashed in front of him, but Miller remains positive about his chances at the upcoming grand prix.

“It was a pretty good race for us, we made up a few positions,” said Miller. “I just struggled a lot on the straights with the KTMs. The bike is working incredibly well in the corners but when we come to the straights we just seem to lose a lot.

“I end up getting stuck with other riders which is the problem. We’re making really really good lap times but for sure we can get a better result if we can close that little gap to the front.”

The Australian hoped the next race on the calendar, the popular testing venue at Jerez, would see the frontrunners’ speed advantage reduced.

“Jerez is probably a better track for us,” he continued. “In testing we were quick there and now we’ve got the bike dialled in and working well we should be alright. The straight isn’t as long here so I think it will be a lot better.”

The 18-year-old improved to tenth place on the Moto3 standings, with only three points separating him from seventh place in a closely-contested championship battle.