Schwantz to join Yukio Kagayama and Noriyuki Haga in a Suzuki 'dream team'. 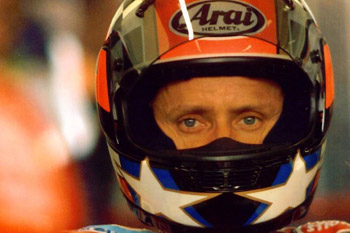 Kevin Schwantz will return to the grid at the 2013 Suzuka 8 Hour after an 21-year absence. Image: Kevin-Schwantz.com.

Kevin Schwantz has been announced as a shock addition to the Suzuka 8 Hour grid in July, 21 years since his last showing at the famed Japanese endurance event.

The 1993 MotoGP World Champion will join Team Kagayama’s Yukio Kagayama and Noriyuki Haga in what must be considered a ‘dream team’ for the 36th running of the event.

The vastly-experienced American enjoyed a successful career with Suzuki, winning 25 grands prix aboard the RGV500 in his nine years in the world’s premier motorcycle racing category.

He said he looked forward to the challenge that the Suzuka 8 Hour would offer and was pleased to be joining Kagayama and Haga aboard the GSX-R1000.

“I still ride a motorcycle on a daily basis because I run a riding school in the United States even now after my
retirement from racing, so I have no problems in terms of the senses,” said Schwantz. “I’m already looking forward to the
“midsummer celebration” in the severe heat.

“I have been saying that I have not won Suzuka 8 Hours yet. I want to win it by all means and leave it onto one page of my racing career.”

“With the best machine and two fast and tough riders who are very familiar with Suzuka Circuit, I sure have the chance to win if I participate in the 8 Hours.”

Kagayama described the addition of Schwantz to the lineup as the completion of his “dream team” and said he would fight with all of his heart and strength in the pursuit of victory.

Kagayama and Haga have achieved victory at the Suzuka 8 Hour on separate occasions, the former in 2007 and the latter in 1996.