Yamaha Racing Team confirms it will not contest 2013 FX-500

The powerhouse Yamaha Racing Team has confirmed its decision not to enter the $100,000 FX-Superbike 500 at Sydney Motorsport Park in November. 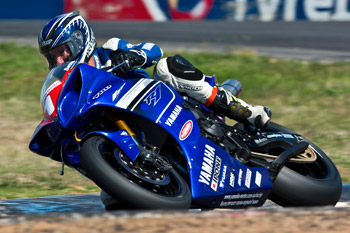 The Yamaha Racing Team have confirmed they will not enter the FX-500, making for a noticeable absence in the paddock. Image: Brian Dyer.

The powerhouse Yamaha Racing Team has confirmed its decision not to enter the $100,000 FX-Superbike 500 at Sydney Motorsport Park in November.

Team principal John Redding has cited the financial feasibility of entering as the primary factor, with the outfit’s racing calendar for 2013, and available budget, already locked away.

“We’re not in the same situation we were two, three or four years ago,” said Redding. “If a non-calendared event came along you could usually find the additional funds to do it.

“We knew more than 12 months ago that we would be competing in the FX-Superbike championship for 2013, and that we were going to have four riders, essentially working on the same principle we did in 2012.

“In addition we’d been saving some money and had approached our individual sponsors for the support we needed to run the World Supersport wildcard, which is a project we’d been working on for two years.”

Redding said the team considered all of the factors involved in competing before making its ultimate decision.

“When the FX-500 came up in its first format it initially looked quite expensive,” he said. “There was the new type of tyre, treaded tyres, so we knew that to be competitive there would be testing required beforehand to find the right tyre for the task.

“We factored all of that in and obviously at the time there was no discussion about any kind of pit stop restrictions or anything, so we then had to factor in having some special equipment made, stands, and the like, and adding in training with staff for the quick wheel changes and so on, it was starting to become a relatively expensive exercise.

“For the riders that win it they do very well out of it, but certainly the team has to look at what they get out of it and we didn’t see any real attraction for the team itself.”

The absence of the largest and most professional team in the paddock will certainly be noticeable, though Redding hasn’t ruled out competing completely in years to come.

“It’s not got the reputation of a Suzuka 8 Hour, or a Castrol 6 Hour,” he said. “At the moment, the profile isn’t there, but if Terry [O’Neill] can keep the prize there and keep the pressure up then it can build a broader base of attention – it’s still early days.”

The inaugural FX-500 will take place on 15-16 November at the Sydney-based complex.