Suzuki to host Hayabusa Show and Shine at Queensland ASBK round

Suzuki Australia is looking to transform the Queensland Raceway into a Hayabusa Heaven next month. 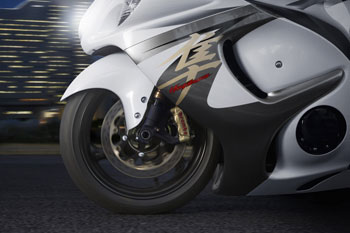 Suzuki will host a Hayabusa Show and Shine at the Queensland ASBK round.

Suzuki Australia is looking to transform the Queensland Raceway into a Hayabusa Heaven next month with a Show and Shine event to coincide with the national media launch of the 2013 model.

The Hayabusa Show and Shine will be held at Queensland Raceway on Sunday, 16 June, adjacent to the Team Suzuki pit garage.

“The Hayabusa is the true icon of high performance motorcycles and we are calling on owners from throughout south-east Queensland and northern NSW to converge on Ipswich for the 2013 Hayabusa Show and Shine,” said Suzuki Australia Motorcycles general manager Perry Morison.

“We will be awarding prizes for Best Custom, Best Original (pre 2009) and Best in Show. In addition, riders Wayne Maxwell and Robbie Bugden will award a special Team Suzuki Racers’ Choice.

“Winners will be awarded a commemorative plaque, Suzuki goodies bag and a photographic package. They will also have the chance to be among the very first to get up close and personal with the new 2013 Hayabusa, and chat with Suzuki Racing’s finest.”

Named after the Japanese bird of prey capable of speeds in excess of 300 km/h, the latest iteration of Suzuki’s ultimate sports bike is sure to turn heads with an all-new Yellow/Black livery.

The all-new 2013 Hayabusa is the first Suzuki sportsbike to feature an Antilock Brake System (ABS), complementing the Hayabusa’s excellent handling and adding another chapter in the ongoing evolution of this legendary sportsbike.

In addition, the 2013 Hayabusa is now equipped with top-of-the-line radial mount Brembo monobloc front brake calipers, promising tactile feedback to the rider, with an enlarged piston diameter from 32-30mm to 32-32mm meaning greater force is applied to the brake disc, resulting in increased initial bite to tame the Hayabusa’s incredible power.

Hayabusa riders interested in taking part in the Show and Shine must make their own way to the track and have their machines on display no later than 10am.

For more information on venue and ticket prices on, please link to www.asbk.com.au/round-info/rd-3-qld-raceway.