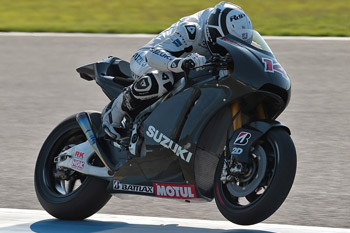 A glimpse at the makeup of MotoGP in 2014 was provided at Japan’s Motegi circuit at the end of last week with private tests carried out by both Suzuki and Honda on 23 and 24 May.

The shroud of secrecy over Suzuki’s return to MotoGP has lifted slightly with the factory testing a prototype race bike that is designed to be more in line with its flagship GSX-R range.

Details are still sparse surrounding the Japanese manufacturer’s possible return to the sport. While 2014 would seem like a realistic target, no announcement has yet been made.

It is unclear, too, whether de Puniet’s testing role means he will be in line for a seat with Suzuki, with riders including Cal Crutchlow and even Nicky Hayden in the mix.

Honda, meanwhile, used the same two days on track to shake down its 2014 MotoGP production machine which will become available to teams wishing to enter the sport at a lower cost level.

“The test results showed more than what we had expected, in particular, with its running performance. We are very pleased at this stage and we will announce more in the not too distant future.”