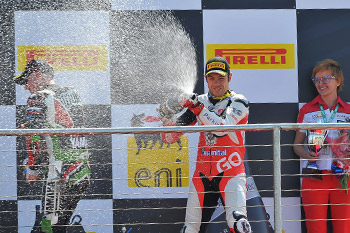 Roberto Rolfo’s ride from 16th to third place in the Donington World Supersport race marked a milestone achievement for the MV Agusta brand as it returned to the world championship podium for the first time in 37 years.

Rolfo guided the ParkinGo MV Agusta F3 675 from a mid-field position in qualifying to a historic rostrum finish with relative ease in only the fifth outing for the brand-new bike.

The last MV Agusta-mounted rider to achieve such a result was none other than the great Giacomo Agostini at the famed Nurburgring.

The momentous occasion was celebrated on the exact same day that the MV Agusta brand had gathered to celebrate its founder, Claudio Castiglioni, at its Schiranna plant.

“I am delighted and thrilled with this first podium result for the F3 675!” exclaimed Giovanni Castiglioni, president and chief executive of MV Agusta. “It has been a great challenge to bring this important brand back on the race track.

“The amazing thing is that this podium was conquered on the same day as the Claudio Castiglioni Memorial organised by the Lombardia Moto Club Cagiva yesterday at our plant in Schiranna.

“I would like to dedicate this success to my father, the man from whom we inherited our great passion for racing.

“My gratitude goes to the Rovelli brothers and the members of the ParkinGo team for the amazing effort they are putting in to this project.”

Despite the achievement, Rolfo rued a poor qualifying result which may have cost him the chance to deliver a win.

“I am truly pleased with this bike, it’s perfect, and the work done by the team, which was impeccable,” said Rolfo. “I’m really sorry I made mistakes during the qualifying on Saturday.

“If I had been able to start further towards the front perhaps I wouldn’t have had the chance to get to first place anyway, but I sure would have had an easier time of it during the race, perhaps even made it one step higher on the podium.

“I promised everyone a comeback yesterday, but even I didn’t expect this fantastic result!”

The result elevates the F3 675 of Rolfo to seventh on the World Supersport standings. His previous best was a sixth place finish at Assen.