Crutchlow will leave Tech3 rather than ride under Espargaro

Brit ready to explore other options if factory contract is not laid on the table. 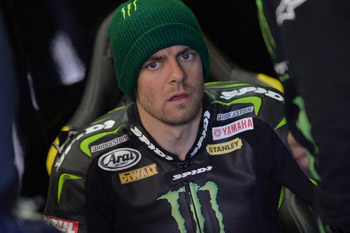 Disgruntled: Cal Crutchlow is ready to leave his Tech3 team should the signing of Pol Espargaro eventuate. Image: Tech 3.

Tensions between lead satellite Yamaha star Cal Crutchlow and his Monster Tech 3 team have hit boiling point, with the Briton indicating he will walk from the team rather than ride under Pol Espargaro in 2014.

Moto2 frontrunner Espargaro is widely tipped to join the team on a factory Yamaha contract next season, and Crutchlow has done little to hide his displeasure at the development.

“They (Yamaha) have signed Pol Espargaro as far as I am aware,” said Crutchlow. “And it is none of my business, but one thing is for sure that I won’t be riding under Espargaro in my team so I will be leaving, that’s clear.

“Even if the option is given for me to ride there (Tech3) I won’t ride there if he has a factory contract and I don’t.

Crutchlow rode to a career best second place at Le Mans a fortnight ago, and feels his achievements merit a factory contract over a would-be rookie to the premier class.

“I am not going to be walked over and I think that is only correct,” he continued. “My situation is that I want to be with Yamaha, I want to ride for the same team now but if there is a factory contract being given out, I think I deserve it before him.

“At the moment I’m not too worried, I am riding the bike, I am still determined and motivated but I won’t ride under Pol Espargaro. My interest is to stay where I am with a better contract than I have now.”

While he would prefer to remain under the Yamaha banner on proven equipment, Crutchlow is not hiding the fact that he is in the frame for a seat at Suzuki upon their return to the sport next year.

“If Suzuki comes back it could be an option but my main option is to stay with Yamaha. We will see.”

Crutchlow finished ahead of both factory Yamaha YZR-M1s in France, and sits fourth on the world championship standings, just 11 points shy of Jorge Lorenzo and 8 points clear of Valentino Rossi.