Neither rider to blame in bizarre, high-speed accident on opening lap of Italian Grand Prix. 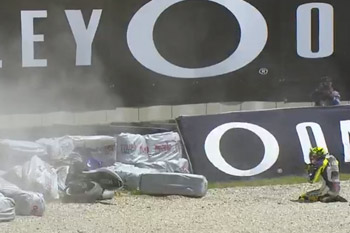 The riders were left with differing opinions of the turn three spill, though both accepted it was difficult to lay blame upon either due to the nature of the crash.

GO&FUN Gresini’s Bautista made heavy contact with Yamaha Factory racer Rossi, the former not seeing the latter as he took an outside line in the early scrap for positions.

The pair ran off the circuit at high-speed and leapt from their seats before their bikes were consumed and spat out by a tyre wall amongst a cloud of dust and a shower of gravel.

Rossi was left to rue a chance at a podium finish in front of a fanatical home crowd.

“I was attacking because we had a good pace and I was fast,” he recalled. “On the second corner I was on the outside already in front of Bautista.

“For me, from the inside he opened the throttle to close the line so he doesn’t lose another position but I was already in front so he came to me and took me on the boot.

“I was lucky because it was a bad crash and I arrived at the wall but I’m okay.”

Bautista was downcast at the outcome – a strong result at Gresini’s home race was an important objective from the Mugello weekend.

“Unfortunately in turn three I made contact with Valentino and we both crashed out of a race that was very important for both of us,” said Bautista.

“Valentino and I have watched the incident back together in race direction and it was just a racing incident that leaves us both with a bitter taste in the mouth but neither of us is to blame.

“I was on the inside and it is very difficult to see a rider on the outside from there. He was taking a slightly different line and that’s why we came together.”

The non-points finish sees Rossi drop to sixth on the standings behind Andrea Dovizioso, with Bautista languishing in eighth.