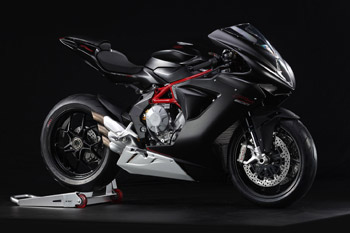 Italian marque MV Agusta has released details of it’s all-new 2014 F3 800 which will see its first international release next month.

MV Agusta touts the three-cylinder, middleweight 798cc machine as a mix of Superbike ‘exhilaration’ and Supersport ‘handling’, with greater torque and power, along with a reduced weight.

The F3 800 is based on the current inline three-cylinder F3 675, with the same bore but a longer stroke, resulting in 148 peak horsepower at 13,000 rpm, roughly 20 horsepower more. A new fuel injection aids in the power increase.

The higher performance results in an increased power-to-weight ratio compared to the F3 675, with the bike able to achieve a top speed of just under 270 kilometres per hour.

The F3 800 weighs in at the same as the F3 675 (173 kilograms), with the majority of components shared across both models, including the chassis which is comprised of a main structure of tubular steel, a pair of cast-aluminium side plates and an extended swingarm.

MV Agusta’s class leading electronics are present on the F3 800, with a full ride-by-wire system the basis of the brand’s Motor and Vehicle Integrated Control System (MVICS). Three maps, defined by technicians, plus a custom map, defined by the rider, are available.

The F3 675’s acclaimed traction control system is emulated on its bigger brother, with eight different levels that are easily set by handlebar controls via the fully digital dashboard.

The bike will be launched at Misano World Circuit Marco Simoncelli in Italy tomorrow.

MV Agusta’s European unit price is listed at 13,990€, which is just over $19,000 Australian. This price is indicative only and will vary based on local import duties and taxes.