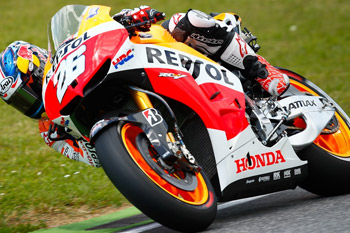 Dani Pedrosa will start his 200th grand prix in front of a home crowd at Catalunya. Image: MotoGP.com.

MotoGP World Championship points leader Dani Pedrosa will start a milestone 200th grand prix with the support of an adoring home crowd at the Catalunya circuit in Montmelo.

Pedrosa is aiming to maintain the momentum of a stellar start to his season which has seen him claim two victories and two second places.

“I’ve been able to rest a little since returning from Italy and now we head to my home Grand Prix in Catalunya, still leading the World Championship,” said Pedrosa.

“This track is one of the circuits where you stay on the edge of the tyre longer and also a long time turning right so it’s important to have a good feeling with the tyres.”

“It’s difficult to say now whether it will be a Honda circuit or a Yamaha circuit, but I hope that the bike goes well there and that we can have a good race against the Yamahas.

“I would say that victories are key at this stage of the championship and, with strong rivals, it is important to be on the podium.”

He said the occasion would be made especially memorable as he celebrated a milestone in front of a home crowd.

“In general it’s a nice track and with a very special atmosphere, all my family and friends come to support me and the fans are incredible,” said Pedrosa.

“Hopefully the weather is good there and we can put on a good race for everyone at my 200th Grand Prix start!”

The Spaniard leads the world championship by 12 points over Jorge Lorenzo. His teammate Marc Marquez drifted from the top-two battle after crashing out in Italy.