Yamaha's Valentino Rossi says he is not getting the best from his bike in the new qualifying format. 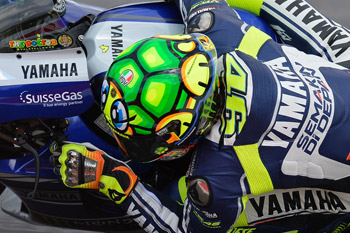 Valentino Rossi is targeting no less than a second row start this weekend. Image: YamahaMotoGP.com.

Valentino Rossi has admitted he is struggling to match his rivals in the high-pressure MotoGP qualifying format and knows he will need to improve in order to mount consistent podium challenges.

Speaking ahead of the Catalan Grand Prix, the Yamaha Factory Racing rider identified poor qualifying as a contributing factor to the crash involving Alvaro Bautista in Italy, and said he was targeting a second row start at worst in order to avoid such an incident in future.

“In Mugello I had to start on the third row,” said Rossi. “Unfortunately I had the problem in the start and lost more positions which put me in the wrong place at the wrong moment which led to it [the crash].

“We need to do another step. We have to be faster, especially on Saturday afternoon. The maximum is the second row.”

Rossi said he had struggled to get the better of rival racers in terms of strategy in the high-pressure 15-minute qualifying session.

“The main problem is, with just 15 minutes, it’s very difficult to understand the right moment to go on the track and try to do your best,” he continued.

“At the same moment you have to be careful you are not giving a slipstream to riders, maybe two or three of them behind you, where they can overtake. You need a clear lap, and nobody behind you. It is a lot about strategy.”

Rossi has won nine times at the Montmelo circuit and is hopeful of matching the pace of his teammate Jorge Lorenzo and the factory Honda pairing of Dani Pedrosa and Marc Marquez this weekend.