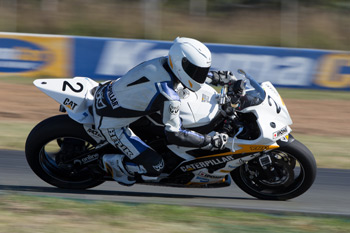 Yamaha Racing Developments (YRD) chief John Redding has hailed the Yamaha R6 as the “weapon of choice” for the 600cc category following its trouncing of the competition in the Supersport ranks at Queensland Raceway.

Blue bikes dominated proceedings in the competitive class, with Michael Blair collecting both race wins and the overall while R6 racers filled the next five placings for the round.

Ryan Taylor (2-3) finished second overall, with Daniel Falzon (4-2) retaining his points lead after finishing third for the round.

The prevalence of the R6 in the class is illustrated by its command of the manufacturers’ championship – it has scored 552 points from two rounds, with Kawasaki next on 129 points.

“The Yamaha R6 continues to prove itself time and again, in all situations and with a wide range of riders,” said Redding. “Regardless if it’s the FX Superbikes or the ASBK championship, the Yamaha R6 is the weapon of choice for all 600cc road racers.

“The beauty of the R6 is that the race bikes used by these successful racers isn’t far removed from the bike you can buy from any Yamaha dealer.

“It is a quality road bike that is quickly and easily adapted to a high performance race bike that has stood the test of time and competition.”

Similar domination is reflected within the Australian FX-600 Championship ranks, with the Yamaha R6 occupying the top 10 positions on the standings after three rounds of competition.