Lorenzo ruled out of Assen TT with broken collarbone

Defending champion crashes at over 200km/h in Thursday practice, to undergo surgery shortly. 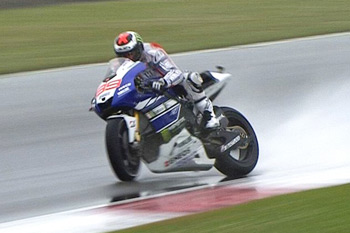 Jorge Lorenzo moments before he was flicked over his Yamaha in a vicious high-side. Image: MotoGP.com.

Defending MotoGP World Champion Jorge Lorenzo will miss the Assen TT race after breaking his collarbone in a high-speed crash in the second Thursday practice session.

The Yamaha Factory Racing rider, who had topped the earlier session, hit a patch of standing water and was thrown over his YZR-M1 in a vicious high-side incident that saw his left shoulder and, to a lesser extent, his head, bear the brunt of the impact.

Lorenzo had been riding the confidence of topping the earlier session and said this may have contributed to the crash.

“I think I was too confident, at the moment of the crash I was very fast and felt very strong, but maybe the conditions weren’t the perfect ones to have this high confidence,” he said.

“I entered the corner faster than the previous lap and I think touched a patch of water, or maybe aquaplaned which made the rear wheel light and touch onto the white line, making it a lot worse which is why I crashed.

“You must always be optimistic, things could be worse and I will try to recover as soon as possible.”

The Spanish rider was assessed at the circuit medical centre before being transferred to a hospital in Assen. It is expected he will undergo surgery in Barcelona within a 24-48 hour period, according to MotoGP team doctor Xavier Mir.

“Jorge has a high inertia trauma but results are normal from initial neurological examination,” explained Dr Mir. “We will move to Assen to make head and chest scans and also an abdominal exploration.

“Our first diagnosis revealed that there is a left clavicle fracture with a slight shift that will need surgery to repair the bone. This injury is in the background while we rule out any other major injury that may become apparent within 24 hours.”

Teammate Valentino Rossi has added to the chorus of support for the injured rider, and said he hoped to be able to deliver a good result in lieu of the factory outfit’s setback.

“Unfortunately Jorge had a big crash and an injury,” said Rossi. “It’s a great pity for Yamaha, for the team and for him as he is fighting for the championship.

“I hope that he comes back as soon as possible, hopefully for the next race in Sachsenring. I hope to do a good result because I am now the man of the team for Yamaha, for the factory team and all the guys.”