Jack Miller and Arthur Sissis recap a race-long battle for seventh place in the Netherlands. 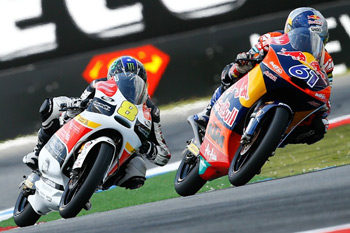 Australia’s Jack Miller and Arthur Sissis found themselves going head-to-head in a heated battle at the Assen TT, relishing the close racing but admitting it meant they lost touch with the leading group of Moto3 riders.

Sissis held the advantage for a further two laps before Miller made the move back on lap four, slotting into seventh.

Miller maintained a narrow advantage over his countryman but was forced to the defensive, allowing the top six to build a gap that they could not bridge.

“The bike was really good for the first eight laps and I had a good start but I got stuck behind Arthur for a few laps and we lost touch with the leaders,” said Miller.

“I destroyed the tyres after ten laps, and I was losing the front all over the place. There was another good battle with Sissis at the end, and I managed to fight him off. I’m pretty happy.”

Sissis enjoyed the race-long battle and credited Miller for his strong showing.

“I got a nice start and was up with the front guys in the early laps,” said Sissis. “I was not able to stay with them because Jack and I tussled too much and they escaped.

“Our battle lasted to the end, when I tried to overtake him on the final braking point, but he was very strong and I could not beat him today.

“Finishing eighth after so many bad weekends is a step forward. I am very happy with the work we have done and hope we can continue this way.”

Miller and Sissis finished seventh and eighth respectively, separated by less than two-tenths of a second after 22 laps.

Miller is 10th on the Moto3 standings after seven rounds, with Sissis improving to 11th.