Long-serving Ducati rider Nicky Hayden could make a move to the production-based series if he cannot secure a factory seat for 2014. 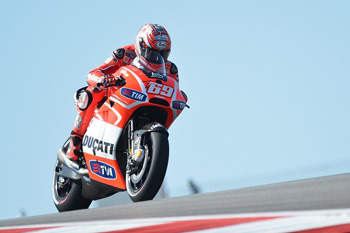 Could Hayden make the move to a World Superbike seat next year? Image: MotoGP.com.

Long-serving Ducati MotoGP man Nicky Hayden is weighing up his options for the 2014 season and admits a move to the World Superbike Championship is a distinct possibility.

Hayden said his preference would be to remain in MotoGP in a factory position, but was open to options.

The 2006 world champion joined Ducati in 2009 and has finished on the podium just three times in that period. He is eager to remain with the brand if the opportunity presents itself but is unsure of the team’s future plans.

“I have had some contact from WSB teams and I am interested,” Hayden told Motorcycle News. “I would love to stay in MotoGP on the right bike and the right team but at the moment it doesn’t look so good.

“I want to keep racing, so I might have to look somewhere else and I have to look at what my options are and take the one I feel is the best.”

While he said the move was a possibility, he felt the transition to the fundamentally-different series would be a challenge.

“It would not be a bad little thing. I haven’t been to a WSB race in years so I’m not a good guy to comment on the level,” he continued.

“It is a good championship and there are factories involved, so there is a lot to play for. I don’t think it would be easy to just jump in there after 10 years here (in MotoGP) and I am sure it will be a big challenge.”

Fifth place at the Le Mans Grand Prix is Hayden’s best finish of the season so far. He sits eighth on the standings, 15 points shy of teammate Andrea Dovizioso who is currently placed sixth.