Laguna Seca decision down to Lorenzo and Yamaha

Defending world champion receives clearance from specialists to ride if he feels capable. 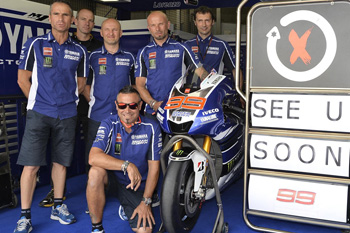 Jorge Lorenzo’s crew is ready for him to race at Laguna Seca. Image: MotoGP.com.

The decision to race or sit out the weekend’s Laguna Seca Grand Prix now sits solely with Jorge Lorenzo and Yamaha Factory Racing after the defending world champion received a positive assessment from medical specialists in Spain.

Lorenzo chose to compete at the Sachsenring, a move that proved costly as he crashed heavily, damaging the plate inserted to correct his broken collarbone sustained a fortnight prior.

He received immediate treatment following the incident and is recovering as hoped, according to Doctor Marc Cots of Catalunya General Hospital.

“His injury is healing well and looks completely normal,” explained Dr. Cots. “The plate we inserted is well positioned and we’re pleased with the progress the injury is making.

“Jorge is physically capable of riding again now, just as he did at Assen immediately after his pervious surgery.”

“However, our advice is to be cautious and avoid the risk of another crash, but the decision on when to return is entirely up to him and I suppose he’ll make that decision soon.”

Teammate Valentino Rossi believes the competitive streak in his fellow factory M1 rider will show and fans will see Lorenzo on the grid at Laguna Seca.

“This is just my idea, but Jorge will race at Laguna,“ said Rossi. “I don’t know anything. It is just my feeling. Because he has one week, the surgery was okay.

“At the beginning for sure for Jorge it was scary and frustrating. But I know what happens in the mind after some days, you feel not so bad and you say ‘why not?'”

Laguna Seca is the first of the back-to-back US races, with an extended break between this weekend’s Californian event and the mid-August shown at Indianapolis.