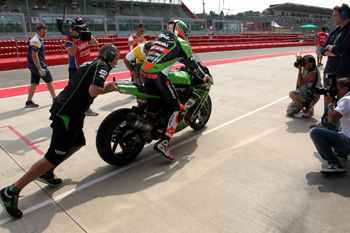 There will be plenty of attention centred on the sizzling form of Tom Sykes as he looks for more success at Moscow Raceway.

The British rider took the first race win at the inaugural event last year, and finished on the middle step of the podium for the second race.

He took control of the points lead by virtue of a perfect weekend in Italy, and heads to the eighth round of competition as the first Kawasaki rider to head the standings for almost 20 years.

“Last year Moscow was new for everybody and I consider myself quite good at learning tracks pretty quickly,” said Sykes.

“I have a massive belief in Kawasaki and the team so I knew we would make a good package for Moscow last year – and we won a race because of it.”

Any advantage is now negated as Sykes’ rivals ready themselves for Russia with race experience and a bundle of data to build from.

“Like me almost all my rivals have knowledge of the Russian track now so it will be harder this year but it is a good circuit to compete at,” he continued.

“We went down in history as winners of the first ever race there last year, which adds to the enjoyment of going back there.

“Overall it is a tight, twisty and technical track but it does provide for good racing.”

Moscow will also offer Superpole specialist Sykes a chance to score his seventh pole of the season, and in doing so, equal Ben Spies record.

Sykes leads Aprilia’s Sylvain Guintoli by a six-point margin at the mid-point of the 2013 season, displacing the RSV4 rider from the top spot he had held since race one at Phillip Island in February.