Donation to assist in raising funds for a vital foundation within the Victorian community. 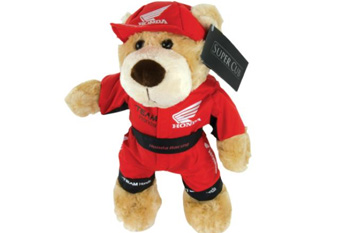 Honda Australia has donated over 1,000 plush Super Cub Racing Bears to the Royal Children’s Hospital Foundation to raise funds for the Melbourne facility.

The collectable bears will be distributed amongst the Foundation’s network of auxiliary groups to widen the fundraising reach, though a number will remain at the Royal Children’s Hospital Main Street location for purchase at the central auxiliary store.

“We know how much kids love teddy bears, and so it was an easy decision to contact the Royal Children’s Hospital with this donation idea,” explained Baynes.

“We hope the Honda Super Cub Racing Bears will bring both the children joy and the Royal Children’s Hospital important funds.

“We are incredibly lucky to have one of the best children’s hospitals in the world right here in Melbourne and as a community it is vital we stand behind this organisation and support it.”

The collectable bear was designed in Australia to mark Honda’s 50-year racing milestone.

The donation reflects Honda’s wider global philosophy to acknowledge responsibility to the community and surrounding environment.

The Royal Children’s Hospital Melbourne is one of the world’s leading paediatric hospitals and has been providing an outstanding level of care to Victorian children for over 140 years.