Repsol Honda rider Marc Marquez became the youngest ever back-to-back winner in the US, and extended his premier class points lead. 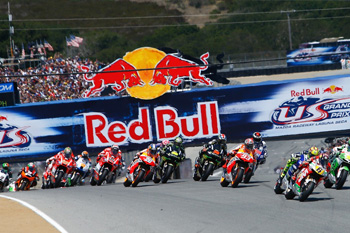 The field was tightly-bunched on the opening lap of the Red Bull US Grand Prix at Laguna Seca. Image: MotoGP.com.

Marc Marquez has led a Honda one-two finish at Laguna Seca, extending his lead of the MotoGP World Championship with back-to-back wins as the summer break approaches.

The Repsol Honda rider headed to the second US Grand Prix of the season again never having ridden the circuit, but quickly adapted to its nuances and by qualifying was quick enough for a second-place grid position.

The pre-race focus was on the LCR Honda MotoGP mount of Stefan Bradl, with the German securing his first premier class pole position after one and half seasons in the category.

Bradl was fast off the start and set about establishing a lead in the opening laps as the scrap for track space played out behind him.

Yamaha Factory Racing’s Valentino Rossi was second, with Marquez finding his footing for third early despite being swamped into the first corner.

Behind the top three battle was GO&FUN Gresini Honda’s Alvaro Bautista, realising the importance of a good result, and then came the injured title-fighters Jorge Lorenzo and Dani Pedrosa, both pushing themselves to ride in spite of severe discomfort.

As the laps ticked over Bradl showed strength at the front of the field, managing the pace early on without placing undue stress on the tyres as the Californian summer sun beat down.

Behind Bradl the focus was on the battle for second place as Marquez began to reel back Rossi’s advantage. The Spaniard wasted little time behind the multiple world champion and was able to edge by at the corkscrew, running his bike through the inside of the corner to ensure no contact took place.

With Rossi displaced, Marquez soon upped the pace and within a few laps had closed up on leader Bradl in what turned into an entertaining battle between the 2011 and 2012 Moto World Champions.

Bradl appeared to have Marquez’ measure up until the mid-point at which point the rookie rider made a decisive move for the lead. The Repsol Honda factory machine eased away from the LCR Honda satellite, with Bradl’s focus switching to keeping a gap between himself and third-placed Rossi.

In the end Marquez cruised to a comfortable victory by 2.298 seconds, becoming the youngest ever back-to-back winner in the class and extending his lead of the world championship to 16 points in the process.

“The race was good today, it was a bit scary with all the bumps, it is very easy to lose the front,” said Marquez.

“First I was able to overtake Valentino, then when I got past Stefan I tried to open up the gap.

“I’m very happy we got 25 points from today and go into the Summer on a good finishing note.”

Bradl was uncontested for second, while Rossi held off the advances of Bautista in the closing stages to round out the podium.

The podium was the German rider’s first in the premier class, an achievement celebrated with enthusiasm by his team.

“It is a great result for us,” said Bradl. “We did a good job all weekend. The expectations were high after yesterday and I knew I had good speed and could be fast from the beginning.

“I knew Marc would have a good reference from me and I thought the race speed would be higher as the laps went on.

“He had more edge grip on the tyre than me when he caught me so I just tried to manage the gap back to Valentino.”

Rossi was pleased to finish as the lead Yamaha given the apparent advantage the Honda machines enjoyed at the circuit.

“I’m so happy about the podium, it is more positive than compared to the Sachsenring, and more positive for Yamaha with the disadvantage to the Honda,” said Rossi.

“I didn’t have the pace to say with Stefan today, he was too fast. I had a good battle with Bautista who was very strong.

“At the end there was a lot of problem with the slower guys, and Alvaro caught back up. But I am happy to be the first Yamaha, and to get the third podium in a row.”

With Bautista fourth, the crucial battle for championship points between Pedrosa and Lorenzo fell in favour of the Honda rider, who was fifth. Both were visibly spent after a taxing three days on track as they managed the effects of their recent respective inures.

Cal Crutchlow was a distant seventh on the Monster Tech3 machine, falling well short of his recent run of podium finish form after a grand prix weekend littered with handling issues and crashes.

Nicky Hayden beat home teammate Andrea Dovizioso for eighth, with the pair coming together momentarily in the fast run to turn one in the closing stages.

Hector Barbera was tenth and the leading CRT machine home, with Aleix Espargaro’s run of first CRT at every prior GP coming to an end with an early crash.

GO&FUN Gresini Honda’s Bryan Staring ran in the points for a large part of the race but found himself dropping to 17th at the conclusion. Staring and a number of other riders were forced to give way to the lead pack, with the Aussie losing track position as he stepped aside.

The MotoGP World Championship now enters an extended Summer break, with action resuming at Indianapolis for the third US-based GP of the season on 16 August.