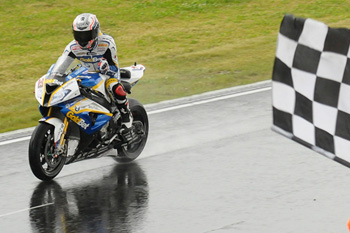 Marco Melandri claimed the only race win on offer on a dark day at Moscow Raceway.

Marco Melandri and the BMW Motorrad GoldBet SBK team were the top performers on race day in Russia, taking what would be the only win on offer on a sombre and tragic day for the World Superbike paddock.

Changeable weather brought about a shake-up in results in the Superbike class, with light rain falling as the opening race got underway.

The first lap brought about no less than three retirements, with Carlos Checa, Vittorio Iannuzzo and Lorenzo Savadori all crashing out.

Giugliano’s pole position came undone when he crashed a lap later, moving Melandri into the mix along with Aprilia’s Eugene Laverty.

Kawasaki’s Tom Sykes looked to be staging a recovery from a slow start but saw his hopes and championship lead go up in flames – literally – when a technical problem sidelined his ZX-10R.

Up front Davies was treading gingerly but gaining confidence by the lap as his BMW seemed settled in the tricky conditions. By lap eight he had pulled in excess of a five-second gap on his teammate, a buffer he managed for much of the race as the high rate of attrition continued behind him.

The spate of accidents saw the reduced field throw caution to the wind, and when Davies finally elected to pit for a change of tyre on lap 20, the field duly followed.

Loris Baz, the sole remaining factory Kawasaki, gambled for a further lap and led momentarily before he too pitted for a change of tyre as the conditions worsened.

The lead was handed back to the BMW Motorrad GoldBet SBK team thought this time it was Melandri in the lead, moving by teammate Davies after a particularly handy pit stop by his team saw the pair exit the pits together.

Jonathan Rea looked set to claim the third podium placing on offer but a late charge by the sole remaining factory Ducati of Ayrton Badovini saw the Panigale 1199 R able to claim its first podium finish in the now torrid conditions.

Melandri was most comfortable in the conditions and eventually moved 7.441 seconds clear of his teammate for his third win of the season.

By virtue of his battle to sixth, and Sykes’ subsequent retirement, the result of the first and only WSBK race in Russia moves Aprilia’s Guintoli back into the title lead.

Following the tragic World Supersport accident in which Andrea Antonelli was killed, officials elected to cancel all remaining track activity for the Russian round.

Competition featuring all classes will resume at Silverstone in England on 8 August.