Glenn Allerton confirmed his blistering pace aboard the BMW but there was plenty of focus on the three-time WSBK champion too. 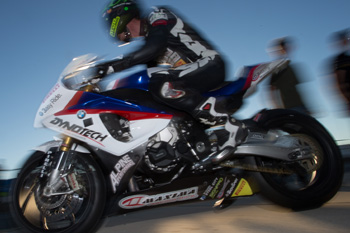 The session, open to those who had already completed an FX-Superbike round, entered the following round or entered the FX-500 event in 2013, drew a large contingent of riders, with three separate class categories each afforded six valuable 20-minute sessions.

Allerton topped the FX-Superbike and Formula Oz category sessions, along with the final and separate ‘All Powers’ session of the day where he set his fastest lap, a 1m30.8790.

“We worked through a lot of stuff as far as things I wanted to try to try and make the bike work better,” explained Allerton.

“I don’t think conditions were exactly ideal seeing as though we had a lot of rain between the last test and now, but I’m really happy with the final outcome of the test.

“On the very last session of the day there was not much traffic and it was good to turn some fast laps. I was trying to do a race run there but unfortunately the red flag came out as a bike had an engine blow up down the main straight and there was oil and smoke everywhere.”

There was plenty of focus on the man who lapped second-fastest in the FX-Superbike class – none other than three-time World Superbike Champion Troy Bayliss.

Bayliss set a 1m31.6610 lap in the FX-Superbike field, 0.5810 seconds off Allerton in the head-to-head match but around an additional two-tenths off Allerton’s ultimate pace in the final 30-minute session.

With the restrictions placed upon eligibility for the test, Allerton speculated that Bayliss would indeed be on the grid for the 16 November $100,000 FX-500 event to be held at the same circuit.

“I would have to say that’s exactly what he was there for,” said Allerton when asked about Bayliss’ surprise appearance. “It would be good advertising for Ducati and racing in Australia in general.

“I followed him for a couple of corners and you can see why he is a three-time World Superbike Champion – he’s a great rider. To have him out there is really good for the sport and I hope to see more of him.”

Dustin Goldsmith was third-quickest in the FX-Superbike ranks, leading a trio of Kawasaki ZX10Rs in Sean Condon and Matt Walters.

Craig McMartin was sixth-fastest on the second Ducati in the field, with Russell Holland and Rick Olson seventh and eighth respectively.

YRT’s Cru Halliday was the quickest 600cc competitor on his slick-shod FX600 machine with a 1m33.986 lap, with a host of ASBK Supersport regulars on their treaded tyres following him home.

A number of eligible ASBK Superbike competitors took the chance to get in some final practice prior to the Sydney Motorsport Park double-header in just under a fortnight, with InsureMyRide Racing’s Glenn Scott coming in second-fastest in the Formula Oz ranks behind Allerton.