Go behind the scenes with the multiple MotoGP World Champion at a track he had custom-built in Tavullia. 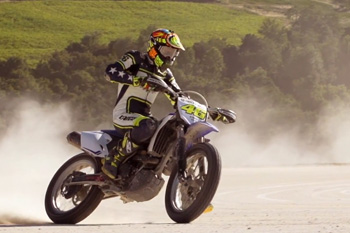 Valentino Rossi demonstrates his passion for two wheels in this short film.

An engaging short film released by long-time Valentino Rossi sponsor Dainese has provided a rare insight into the Italian’s life away from the MotoGP circuit.

‘Rossi’s Ranch’ goes behind the scenes at a circuit the multiple world champion has had custom built in the hills of his hometown of Tavullia.

“It’s like a dream from when you are a child. You hope for one moment that you can buy your own racetrack,” begins Rossi.

“Around three years ago we find this place, that is very close to Tavullia, very close to my house. We build every corner – this track is something special.”

The trio arm themselves with a weapon of choice from Rossi’s burgeoning garage of bikes – ‘The Doctor’ of course riding blue – and take to the track.

“The grip level is very low – a percentage of concrete, that is stable, but at the same time it is also dirt,” explained Rossi.

The Italian rider believes the key to riding any kind of bike is to retain the element of fun, something he has never left sight of.

“The taste to go at the limit is the same as the first day. To have fun, when you ride, is the most important bit.”

The video is approaching 350,000 views on social video sharing site YouTube just two days after it was posted.