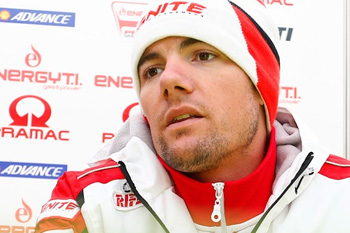 Ben Spies will be back on the Pramac Ducati at the Indianapolis Grand Prix. Image: MotoGP.com.

American Ben Spies will return to his regular mount at Pramac Ducati for the Indianapolis Grand Prix, close to four months after being sidelined with a shoulder injury and the ongoing complications which stemmed from it.

Spies first hit injury trouble in Malaysia last year, and had surgery to correct damaged ligaments. Further pain and discomfort surfaced as he took part in his home round at the Circuit of the Americas (COTA), and he has been unable to contest a race since as a result.

Spies felt he would be at 100 percent fitness for the final US Grand Prix of the season and said he felt in better condition than he had prior to his Sepang mishap.

“Now is the first time in a long time that I’m really happy because my fitness is coming along well,” said Spies. “At the beginning of the season, we came back too soon, and I had another injury at Austin because I wasn’t strong enough to ride.

“Everything is right on schedule, so I look forward to coming back at Indy and being 100 percent. We’ve missed a lot of the season, but I’m looking forward to basically starting my season at Indy and getting back to where we need to be.

Spies addressed speculation that he would be replaced at the team after sitting out the majority of the first-half of 2013.

“I know there have been a lot of rumours, but I know that this break that we took to get me back to 100 percent was the smartest thing to do,” he continued.

“Now I can go to Indy and know that I’m where I need to be with my health, and all I need to do is work on getting back up to speed. It’s the first time in eight months that I’ve had that feeling.”

He said he was disappointed that the injury and associated complications had cost him track time but felt satisfied that he had done everything he could to ensure a strong comeback.

“People don’t see me at the races, but I’ve been working my butt off at home to get back to where I need to be,” he said. “It’s taken a lot longer than I or anybody wanted it to, but there’s nothing we can do about that.”

Spies finished 10th at the season opener in Qatar before struggling to 13th at the COTA. He attempted to make a return to racing at Mugello but was ruled out in the early stages.

The American rider is ranked 18th on the standings with nine points to his credit.