Glenn Scott comes away from Sydney Motorsport Park test day with a solid overall feeling on the Fireblade prior to rounds four and five. 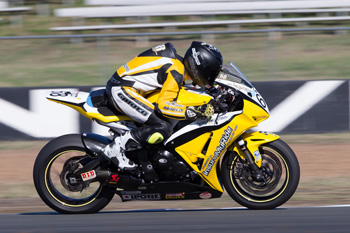 Scott took part in the designated sessions for Formula Oz machines, and ended the six-session outing with the second-fastest time on his Honda CBR1000RR, his 1m32.9350 effort only 0.9310 seconds off the benchmark pace of Glenn Allerton.

Though his pace was impressive, Scott said the focus was distributed between on-track preparation and ensuring the small privateer outfit continued to gain proficiency off the track.

“It was great to have all members of Team InsureMyRide Racing attend the test day; it was a good opportunity to have a race simulation both on track and in the pits,” said Scott.

“We had several things to test on the InsureMyRide Fireblade, we made very positive steps forward with a new rear shock and gained important information with our Dunlop tyres.”

Like they did in readiness for the Queensland Raceway round, the team called upon the services of Top Rider’s Bernie Hatton to refine settings and steadily improve lap times.

“Bernie was brilliant in assisting with set up, tyre development and most importantly to help me understand Sydney Motorsport Park and get the Fireblade around there fast,” continued Scott.

“Riding the Superbike is no easy task and having the rider knowledge of Bernie there to help me is fantastic, we really made some impressive steps forward and the lap times started to drop.”

Rounds four and five of the ASBK will be held at Sydney Motorsport Park from 1-4 August.