The Italian brand's racing division will look to its satellite MotoGP teams along with the World Superbike Championship in the hope of keeping Hayden. 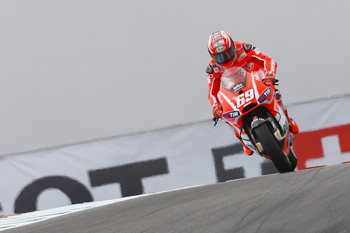 Ducati wants to retain a relationship with Nicky Hayden beyond 2013. Image: MotoGP.com.

Ducati is hopeful of finding a place for Nicky Hayden to race in 2014, even if it is not within the factory MotoGP team’s effort.

The brand’s MotoGP project director Paolo Ciabatti has revealed that Ducati is eager to maintain a relationship with Hayden after the 2006 world champion’s recent revelation that he would not be offered a factory contract for next year.

“Nicky has been very valuable to us for five years and we are fully behind him until the end of the championship,” explained Ciabatti.

“Obviously we will make a different choice for next year and we are trying to see if Nicky can stay with us in a different role, maybe in MotoGP or maybe in Superbikes.

“We are working with him to try and keep him in the Ducati family.”

Within MotoGP, Hayden’s only option would be a step back to the satellite Pramac team. Ducati currently field a two-rider team in World Superbike with Carlos Checa and Ayrton Badovini, though the 1199 Panigale R has been painfully uncompetitive to date in 2013.

In a broader review of Ducati’s MotoGP form in 2013, Ciabatti believes that the struggle to start the season was inevitable, and feels progress can be made from this point on.

“It has been quite a challenging season so far,” he added. “We have had some good results in qualifying but also some disappointing results.

“We knew it was going to be a difficult year and we are racing and developing the bike at the same time, which is never easy.

“We are working hard and we are confident of having something to show at the end of the season.”

Ducati achieved its most recent MotoGP podium placing at San Marino in September last year at the hands of Valentino Rossi.