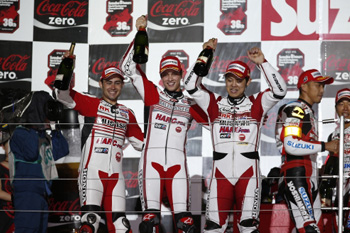 Takuma Takahashi, Leon Haslam and Michael van der Mark on the top step of the podium.

The Monster Energy Yamaha Austria (YART) trio of Katsuyuki Nakasuga and Aussies Broc Parkes and Josh Waters started from pole, with Nakasuga beating his own 2012 lap record mark to set the regular WEC entry in good stead for the race.

The starting phase of the endurance challenge was particularly eventful, with early leader FCC TSR Honda rider Ryuichi Kiyonari crashing out of contention after leading well into the two-hour mark.

Musashi RT Harc-Pro took over the helm, and by half-race distance had built a buffer of over a minute.

Behind them a number of the top WEC teams were struggling, with the YART entry slowed by a minor engine leak which required costly time in the pits for repairs.

They would continue, but other teams, including the BMW Motorrad France Team Thevent, could not, with a series of crashes ruling them out despite battling for the lead early.

Team Kagayama set about their goals quietly and by mid-race distance had moved into third as their more-favoured rivals fell away.

Though a late rain shower would threaten proceedings, the top three results would ultimately remain unchanged, with Musashi RT Harc-Pro completing 214 laps en route to victory, ahead of Yoshimura Suzuki, who finished on the lead lap.

Musashi RT Harc-Pro’s Michael van der Mark, who is a regular campaigner of Honda’s factory World Supersport entries, was elated to share in the victory.

“Winning the Suzuka 8 Hours is an indescribable feeling,” said van der Mark. “It’s one of the finest races in the world.

“It was my first experience at Suzuka and I learned very fast. When I saw Kiyonari crash, we upped the pressure to bring home a win. It’s fabulous to see all these guys on the podium.”

Haslam, teammate to van der Mark in Honda’s World Superbike effort, admitted he felt incredibly nervous as he sat as a spectator in the closing stages.

“The hardest thing was to watch Takumi hold on to our first position in the rain over the last half hour of the race,” said Haslam.

Of the six Aussies contesting the race, Brookes was the best placed for Yoshimura Suzuki in second, with Parkes and Waters finishing eighth for YART.

Jamie Stauffer and Josh Hook were classified 48th for the Honda Dream RT Sakurai Honda team, while Levi Day’s Over Racing team was not-classified after a lengthy stint to repair crash damage.