The Australian Grand Prix Corporation is confident that fans will throw their support behind the sport and the changed lineup at this year's event. 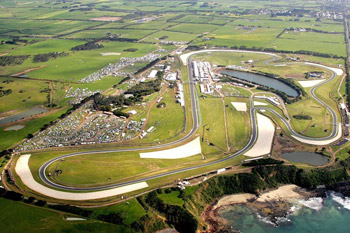 2013 will herald a new era in MotoGP at Phillip Island without the home hero Casey Stoner. Image: MotoGP.com.

Organisers of the Australian Motorcycle Grand Prix at Phillip Island are optimistic that the 18-20 October event could still attract up to 100,000 spectators in what is being heralded as a new era for the sport in Australia.

Grand Prix Corporation chief executive Andrew Westacott told AAP that the focus had obviously shifted from promoting Casey Stoner as the event ‘hero’, but believed the current makeup of the MotoGP championship, including Valentino Rossi’s return to Yamaha and the revelation of Mark Marquez, would be just as appealing to fans.

“Nothing can compare with last year,” said Westacott. “It was just one of those unbelievable Australian sporting moments.

“The one-off interest last year was great for the ongoing awareness of the event and ticket sales but it is a little bit more difficult (in 2013) because what we’ve got to do is promote how open the season is rather than having a hero.”

Stoner’s imminent retirement, combined with his quest for a final grand prix victory on home turf, drew an unprecedented crowd to the circuit in 2012.

Westacott was optimistic that ticket sales could still reach the 100,000 mark in 2013.

“It’s realistic that we’ve got sales more aligned to the 90-100,000 people who come along to MotoGP across three days rather than around 125,000 who came because they wanted to see an end of a sporting icon’s career,” he said.

“In every sport we go through eras – whether it be motorsport, tennis, golf. Now we’re moving onto a new one (in MotoGP).”

Despite Honda constantly quashing speculation of a Stoner return at Phillip Island, Westacott believed the notion was not out of the picture yet.

“Honda had three bikes in their garage last year with (Andrea) Dovizioso – this year Casey might be that third rider,” he continued.

“I’d love him to be there (at Phillip Island) and if he can make it down, we’d throw out the welcome mat.

“Now that he’s back on the bike from a Honda point of view, we’ll always look to have him down there – in the same way we’ve always extended the invitation to any of our previous legends.

“We’ll have some conversations over the next three months now that there’s a little bit more of a plan when it comes to Honda’s involvement.”